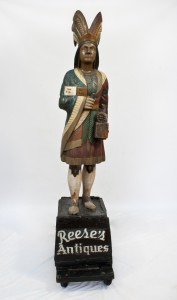 With its very first year as an auctioneer, Material Culture is already traversing the boundaries of the international auction market. Decades of experience in the field of art, antiques and artifacts from around the globe, coupled with its inclusive aesthetic ethos, have made its entrance to the auction world bold and distinctive. Though its inaugural sales in May took place nearly halfway through the year, 2012 can be counted an impressive success. The institution’s experience in the global market contributed to the strong showing of buyers overseas as well as domestically, with educated bidders from over 30 countries regularly participating in their sales.

Material Culture has long been an expert in decorative and ethnographic arts, and many fine or rare examples of hand-crafted art shone in this year’s auctions. The opening sale, entitled “New World Orders,” boasted an original nineteenth-century Cigar Store Indian, attributed to Samuel Anderson Robb (1851-1928), which sold for a total of $36,000. Other exceptional lots in that auction included a finely carved marble relief from northern India, dating all the way back to the 12th century, which achieved $6,500, a Choson elephant from Korea that sold for $1,950, and a long walnut coffee table by American woodworker George Nakashima (1905-1990), which sold for $6,300. On October 14, at the sale “My Reincarnation Brothers and Sisters,” a 19th century Burmese Elephant Bed in excellent condition ended up achieving $5,100. 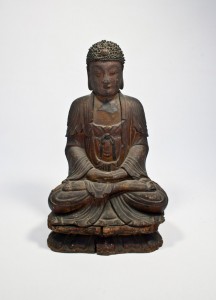 Many of the auctions saw spectacular pieces from China, Tibet, and Japan which achieved high prices. The top lot at the inaugural specialty sale, “Antique Textiles, Carpets, and Ethnographic Arts,” was a Ming Dynasty carved gilt Buddha from the 16th century, which ended up commanding $17,000 in a spirited bidding war. At the same sale, a Tibetan Dharmapala dance mask from the 19th century, depicting a wrathful deity, achieved $3,000, while a 19th century Tibetan or Bhutanese red bull headed Buddhist dance mask of Yamantaka sold for $2,400 on October 14. A carved root wood assemblage from 18th century China, showing two figures and a water buffalo under a tree, sold for $3,500, on May 5, along with an ivory doctor’s lady from circa 1900, which achieved $2,900. An antique ivory vase, dating to 18th century China, with intricately carved figural reliefs, commanded $3,600 at the same May 5 sale. A 19th century Chinese Agate carving sold for $1,700, and a tall 19th century Japanese ivory achieved $2,200 on December 8.

Textiles and carpets have been one of Material Culture’s specialties since its inception, and itemsof exceptional quality in this year’s auctions have upheld that tradition. Textiles from China and Tibet were particularly central in a number of the sales; a vibrant, masterfully-rendered early Thangka scroll painting, dating to 14th-16th century Tibet, was one of the year’s top lots, selling for $46,000 in the high-energy October 14 sale. Another spectacular Tibetan Thangka, dating to the Yuan Dynasty (1271-1368) and in outstanding condition for its age, was well sought-after at the May 26 auction and ended up selling for $4,800. A rare Tibetan High Lama Temple throne canopy of pieced silk brocade with dragons, from the late Ming period (1368-1644), sold for $2,000, and a large Chinese gold field dragon panel from the late Ming or Kangxi era (1661-1722), achieved $1,800, both at the October 14 auction. 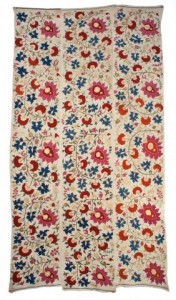 Other exceptional textiles sold at auction this year included an 18th century Ottoman embroidery, which achieved $12,000 on May 26, and an exquisite piece of Persian silk velvet from the 19th century, which sold for $4,300 on the same date. On October 14, an exceptional Syrian judge’s robe of embroidered gold on silk tapestry, from 19th century Aleppo, commanded $3,000, having won First Prize for International Dress Costume at the Eighth International Conference on Oriental Carpets (ICOC) in Philadelphia in 1996. 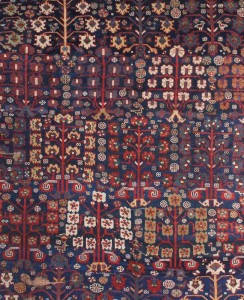 Meanwhile, Material Culture continued to be identifiable as one of the country’s foremost experts on carpets, with several specialty sales showcasing rugs and carpets from all over the world, including Turkey, Greece, the Caucasus, Serbia, Turkmenistan, Uzbekistan, Iran, China, Tibet, India, Burkina Faso, Panama, Peru and of Native American origin. The bidding war on a Persian Tebriz carpet from circa 1900 drove its price to $14,600 on May 26. A 19th century Tibetan Tiger rug at the same auction sold for $3,600. The many successful carpets sold on September 2, included an exceptional classical Serapi style carpet for $5,000, and an outstanding Ushak carpet for $3,100. One early west Persian Kurd rug dating to circa 1800 but still in original estate condition, its deep indigo field exemplary of its well-preserved, vivid color, sold for $4,700 on October 14. A Serapi carpet from 19th century Persia, also in original estate condition, achieved $5,200 on the same date. 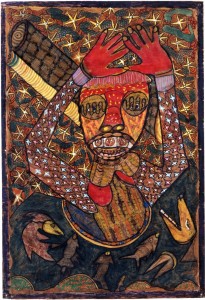 Many auctions saw significant pieces of museum-quality art, both in the realms traditionally considered fine art, and in self-taught art. Material Culture is quickly becoming a leader in the field of self-taught or “outsider” art; the auction house considers the bold, individual visions of artists whose chief training comes from within to be equal to those that come from ‘inside’ the establishment. Many pieces by renowned Nigerian self-taught artist Prince Twins Seven-Seven (1944-2011) were featured at auction during the year, including “The Dream of the Abiku Child,” which achieved $7,300 on May 5, and “The Spirits of My Reincarnation Brothers and Sisters,” which sold on October 14 for $6,700. Another African artist, Ghanaian Kwame Akoto (b. 1950), painting under the name “Almighty God,” had pieces in several sales, such as “Help Me I’m Divorced,” which sold on May 5 for $1,220, and on October 14, “Precious History,” which sold for $1,200.

Two drawings by self-taught American artist James Castle (1899-1977) did well at the inaugural auction; one, entitled “Labor Day,” sold for $2,500, while an untitled piece featuring six figures commanded $4,100. Cuban-American self-taught artist Felipe Jesus Consalvos (1891-1960) was shown to advantage in the same sale. His piece “Guitar,” his distinctive mixed-media collage applied to a full guitar, achieved $7,300, while another mixed-media collage, “Do Not Storm the System,” sold for $4,850. A piece entitled “Spanky and Dave Pitts Ice Capades 1964,” by another self-taught artist, American Justin McCarthy (1892-1977), sold for $2,000 on May 5. 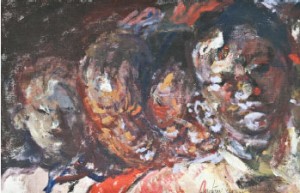 In fine art, a painting by American artist Andrew Turner (1944-2001) sold for $2,300 on May 5. German Expressionist Hans Christoph Drexel (1886-1979) had several pieces in the December 8 sale, including a landscape which sold for $1,950. Several photographs at the inaugural auction saw success, including one by American Keith Carter (b.1948), which sold for $600, an unattributed “Portrait of Three Women,” which sold for $550, and a photograph by American Jock Sturges (b.1947), which totaled $800. Also at the May 5 auction, a Russian Icon with a silver oklad was heavily contested and achieved $6,800.

Material Culture takes pride in bringing forward items of exceptional artistry and craft in its auctions, as it has done for years in its retail store. By launching into the auction business, it aims to serve consignors and buyers of the local artistic community of Philadelphia, as well as the network of art collectors worldwide. The new year will usher in several auctions in January and February, including an “Annex” sale of items with no reserve cost, and specialty sales focusing on carpets, and fine and ethnographic arts. All of Material Culture’s auctions feature live online bidding. For more information, visit the auctioneer’s Upcoming Auctions page.