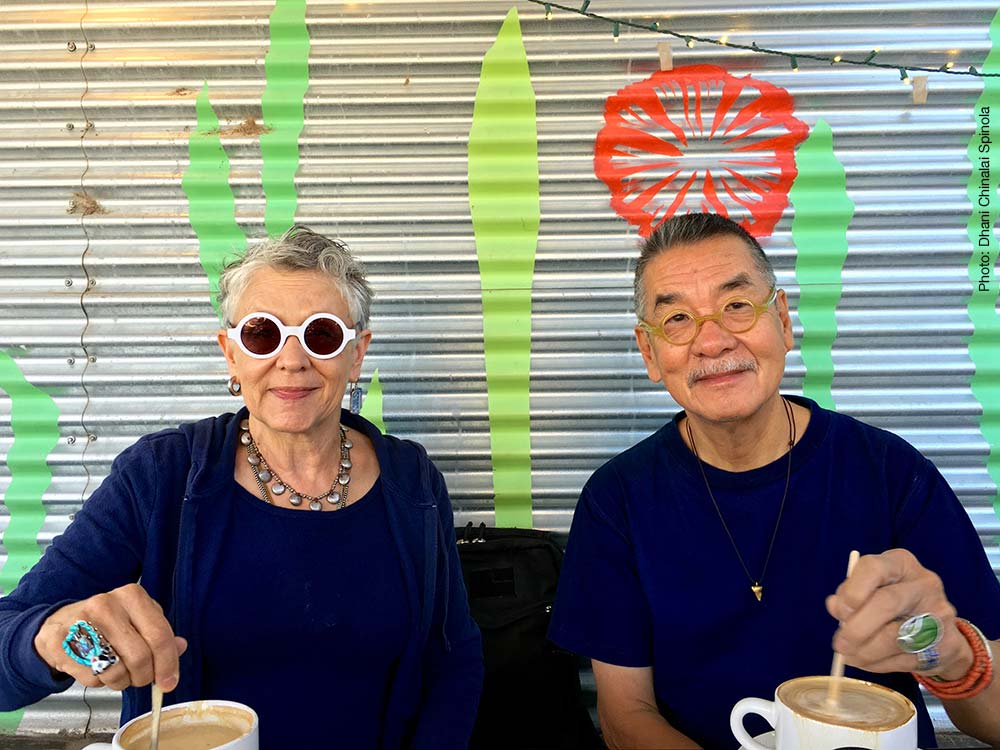 Welcome to our auction and thank you to Material Culture for making it happen.
Why now?

First and foremost, this sale reflects our near-historic lack of restraint in buying Southeast Asian and Chinese ethnographic antiques! It is also about our love of learning and for the artifacts and cultures that created them; and for the people who share our passion.

We started this business over forty years ago with the philosophy that we only would buy what we would be happy to have ourselves. This removed a certain pressure from us: it meant we didn’t have to study the market or try to forecast its trends when we preferred to devote our time to studying the pieces we were buying. We believed in intrinsic value rather than value dictated by fashion or whim.

Not that the market didn’t influence sales but it nearly always was more by coincidence than by design. For example, there was one time at a show when we displayed ten lingam stones of varying sizes, all standing upright on rubber O rings. We thought they were stunning together but O seemed to stand for zero attention. Then Indiana Jones and the Temple of Doom aired on TV Saturday night. By noon on Sunday the lingams had sold out.

It soon became apparent that if people had no knowledge about what they were seeing, they were unlikely to buy it. That led to another decision: in addition to educating ourselves, we needed to embrace the responsibility, and pleasure, of sharing our knowledge, so we began to write. In some instances, what we wrote about had never been published before or had never been published in the West. Many of our articles are on our website at www.chinalai.net under Publications, and a number of items in this auction are described therein.

So what does all of this have to do with lack of restraint? As business continued, we noted that most of the antique artifacts that appeared for sale, whether jewelry, textiles, carpets or objects, had a predictable life span in the markets. They would trickle in for about six months and if they attracted buyers, there suddenly would be an influx of the same type of item. Depending on how many existed originally, the stream might last from one to three years. Then, as if someone had turned off a spigot, there would be fewer and fewer to find until all that were left were extremely worn or damaged. Eventually we only found pieces in collections, and at prices that often were prohibitive.

Over the years, some amount of knowledge and a lot of curiosity, led us to buy early as new and sometimes unrecognizable pieces emerged on the market. As their availability increased and we learned more about them, we were enticed by the tremendous opportunity it gave us to choose the best, and especially when information about them was scarce or impossible to find to compare one similar piece to another. Some tribal groups span large regions and often several countries, so while the work they produced might have a common thread, its variations spoke to differences in geography, status, identity and rites of passage, sub-group by sub-group and even village by village. When little or no documentation about similar material existed, we did our best to sort, study and in some cases classify the examples we had collected. See, for instance, our article on the large embroidered Li tapestries from Hainan, China, called long bei in Chinese: “Long Bei, Ceremonial Dragon Covers of the Li of Hainan”, HALI, London, UK, September-October 2003; and our study of the embroidered head cloths of the Meifu Li: “WRITTEN IN SILK Meifu Li Head Cloths with Writing”, HALI, London, UK, January-February 2007. Attracted by the art and motivated to do research, we bought everything of quality we could find — pretty much without restraint. It was a smart decision at the time but one that was based on the premise that we would never get old. It’s not a huge leap then, even for people who do not yet know us, to figure out at least one of the reasons for this auction!

As we shaped our business and ourselves, we fell in love. All tribal antiques hold stories — about the people who created them, their function, their meanings, and their connections to an individual, family or community. Each shines with its own beauty. It wasn’t long before our love of tribal art encompassed affection for our customers as well. Shared interest in anthropology, about what drives people to create, shared appreciation of the work created, its history, its culture — all this often turned out to be what lay on the surface of a deeper shared outlook and world view. Customers from all over the world became our friends and we began to feel with each sale that we were adopting out the carefully selected pieces we loved to people we loved. The objects, the people who made them, the people who sold them to us, the people who bought them from us, all have enriched our lives.

Now, through this auction, we want to share some of the wealth and in a way that will afford us the pleasure of seeing our customers take pleasure in what we have to offer. By no means are we retiring. Dealing in tribal antiques is too much fun and there is still so much to learn. But what to do with all that we have collected? (It’s way too late to have more kids.) We’ve added more shows, but there’s a law of diminishing returns that seems to be directly related to how long it takes us to unlock our joints each morning.

You will see in this auction our lifelong focus on mainland Southeast Asian and Chinese tribal antiques, but also our inability to stop ourselves from veering off into other countries, or into work that might not be considered tribal but demonstrates spontaneity or mind-blowing skill and creativity, such as the Cambodian silk ikat hip-wrappers, the Neolithic jades and an outstanding Eastern Han Dynasty mirror.

We hope this auction will provide the opportunity for you to live with something you have always wanted. For some there might be something new, a piece you didn’t know we had or that you have come to understand more through attending museums and shows, through your own study, our articles, discussions together and/or the excellent descriptions included in this auction catalog. Perhaps the auction will open new eyes to the importance and appeal of what in many instances are dying arts.

At the very least, this auction enables us to share with you the mystery, the magic and the joy we have experienced in finding, researching, displaying and offering for sale some of the many pieces that have impacted our lives with their stories and their humanity.

Vichai Chinalai is an artist, writer and former architect. Lee is a writer who studied psychology and later Asian Studies at UC, Berkeley. Together they sell ethnographic antiques with a focus on mainland Southeast Asia and China. Both have written numerous articles and curated several exhibits on textiles and other artifacts.

It was Vichai’s work as an architect that brought them to live in Thailand, his country of birth, after he received his Masters Degree in Architecture and worked for a period of time in the U.S. From his office in Bangkok, he acquired additional projects in the Middle East and eventually the family moved to Bahrain.

In Bahrain, Vichai and Lee also opened a shop which grew over a five-year period to include indoor plants, handicrafts, gifts; and then a restaurant. They decorated with tribal carpets and local antiques, then were taken by surprise when customers started buying the decor! That was the early beginning of Chinalai Tribal Antiques. By the time they left for the U.S., it was with three kids, one born in Bangkok and two in Bahrain.

Yet the business in Bahrain continued for almost two decades. In the U.S. Vichai continued to practice architecture, both in the U.S. and Africa. At the same time he and Lee opened a gallery selling ethnographic art and antiques. Eventually they decided to give their full attention to selling tribal antiques.

Vichai and Lee found the function and spiritual value of antique tribal art to be an endless source of interest and study. They have researched and documented the use and iconography of many of the rare and extraordinary textiles, objects and jewelry that have passed through their hands, and continue to take immense pleasure in building collections for museums and private collectors around the world.

For over forty years, Chinalai Tribal Antiques has been a name associated with integrity, knowledge and deep respect for the beauty and culture embodied in antique tribal pieces, and for the remarkable, talented people who made them.