The Collector’s Eye: Art and Artifacts From American Estates

Material Culture’s upcoming auction ‘The Collector’s Eye: Art and Artifacts From American Estates’ will take place on Saturday 26 March (10am est) in Philadelphia. The sale assembles lots from far and wide, crossing cultures, media and time periods in a manner that is becoming a curatorial hallmark for the auction house. Categories in this auction include: American, International, Folk and Self-Taught art; Antiquities; Chinese and Asian Arts; Antique Carpets and Textiles; Ethnographic and Tribal Art; Rare Books, Photography, Works on Paper. 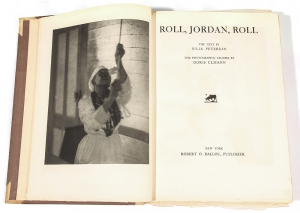 The sale begins with rare books, including, from an Illinois estate, a signed first edition of the classic study of early 20th century plantation life in the American south, Roll, Jordan, Roll, written by Julia Peterkin, and illustrated with a complete set of 90 full-page, hand-pulled copper photogravures after photographs by Doris Ullman. Published in 1933 by Robert O. Ballou, in an edition of 350 numbered copies, this one is numbered “230” and signed by both Ullman and Perterkin on the colophon (est 6000-8000)

Photography and Posters are next in the line-up and include several works by Yousuf Karsh (1908-2002), including a portrait of photographer Edward Steichen (1965), signed in ink, stamped, titled and dated on verso (est 1000-1500). Another noteworthy lot is George Hurrell’s 1946 photograph of the actress Jane Russell for the movie “The Outlaw”, signed and numbered from an edition of 250 (est 800-1200). Going back further in time is a lovely, well-preserved Japanese heirloom tortoise shell photo album, with 61 early photographs, most bearing the Y Takesita Studio of Nagasaki stamp, in a velvet keepsake presentation box (est 200-400). Among vintage European posters in the sale, noteworthy is a 2-poster lot (in both unlettered and lettered versions) by Paul C. Helleu for Ed. Sagot, depicting a discerning patron in contemplation of a purchase at Sagot’s print shop (est 600-800). The American posters, on the other hand, advertise cult classic movies, including the iconic “Marihuana: Weed With Roots in Hell” (1936), Russ Meyer’s “Motorpsycho” (1965), “Hells Belles” (1968) and “Strip Tease Girls” (1952).

The great tradition of American circus sideshow banners is represented with three masterful “Strange Girls” banners by artist Snap Wyatt (1905-1984). All three banners on offer were produced for sideshow promoter Dick Best, who in the early/mid 1960’s toured an all girl show with “born” and “working” (tattooed, fire eaters, sword swallowers, metamorphosis illusions) acts and all three were featured in the book, Freaks, Geeks & Strange Girls: Sideshow Banners of the Great American Midway; Hardy Marks Publications,1994. Dick Best provided shows to both the Royal American and Chicago’s Riverview amusement park during this period. In contrast to Fred Johnson’s pastoral and painterly banners, Wyatt’s banners have simpler backgrounds and exaggerated Coney Island style black outlines, giving them a pop art comic book quality that is believed to have influenced some early Chicago Imagists, many of whom saw them at the Riverview. The enormous 30 foot wide gaff banner (the central, wide horizontal banner that anchors the stage) titled “World’s Strangest Girls” features, in addition to generic acts, a Frog Girl, an Alligator Lady, a dancing midget and the Tattooed Lady Betty Broadbent. The central figure with sprouting plant appendages went by the name Beepy; she had smallish calcium concretions which were greatly exaggerated in the painting. (est. 10,000-15,000)

There are a number of works by American self-taught visionary artist Howard Finster (1916-2001) in the sale, including an early “Vision Film Painting” of mixed media on glass with wood frame, dated “Jan-6 1979” and numbered “1295” (est 1500-2500). There is also, from the collection of Bob Brand and Liz Werthan, an early version of Finster’s classic, oft-repeated Flying Angel with Trumpet, dated “Hi Pass Midnight Feb-1984” and numbered “3000 AND 302 WORKS OF ART” (est 800-1200). Like Howard Finster, Kwame Akoto (aka “Almighty God”, Ghana, b. 1950) is a Christian evangelical preacher. Noteworthy among the offerings by this amazing African artist is lot 33, which combines four mixed media works on his recurring theme of “I Must Stop Smoking”, spoken in the forms of animals, including a horse, fish, frog, and tortoise. (est 1000-1500). Also noteworthy are several works by Chicago artist Tony Fitzpatrick (American, b. 1958) including two “slate paintings” of colored pencil and acrylic on slate, “Holy Viper” (est 800-1200) and “Timberwolf” (est 2000-3000) LOTS

Several noteworthy lots of 17th-19th century Indian art from a Toronto collection include a portrait of the elderly Emperor Alamgir (Aurangzeb), circa 1700, of gouache and gold on paper (est 1000-1500); a 17th18th C. Jain cosmic diagram depicting the World of Mortals or Manushyaloka (illustrating the various levels of material and spiritual experience that humanity must traverse in the journey towards Enlightenment), from Gujarat or Rajasthan; and a collection of eighteen mid-19th century Company School Studies of Costumes and Trades of India. (est 800-1200)

Special note must be made of the 37 lots of Pala Period (11th/12th C) bronze statues from the Matthew Friedman collection. The interaction of Buddhist and Hindu forms during the Pala empire is an amazing testament to an artistic tradition that flourished in the present-day Indian states of Bihar and West Bengal. Compare the remarkable similarities of the two bronze trinity sculptures, one of a seated Vishnu (lot 189), the other a seated Buddha (lot 216). Matthew Friedman is author of three books on the subject of antique Asian bronze, including 1) Nepalese Casted Decanters, Vessels and Bowls 2) Bangladesh Metal Casting: Five Techniques 3) Nepalese Cast Ceremonial Lamps.

Compared to the earthiness of the Friedman bronzes, the antique Sino/Tibetan bronzes in the sale appear to come from a dramatically different artistic tradition, one that placed a high value on detail, gold gilt, embellishment and–on occasion–hyper realism. One can only assume that lot 182, the large, finely wrought and fearsome Buddha/Achala that seems to have leapt out of a Tibetan thangka, must have been commissioned from a workshop that catered to high status clients (est 15,000-20,000). The same taste for ornate, finely detailed workmanship and expensive materials can be seen in three masterful lots of antique Chinese cloissone, including a censer, a vase, and a 10-piece suite of bowl/vase/box/bases/tools.

Other Chinese offerings include some outstanding landscape and calligraphy paintings and a number of fine porcelains.  Highlights include a hanging scroll by Hong Wu (1743-1811; signed, stamps), and an impressively long hand scroll by Dong Gao (1740-1818; signed, stamps). Fine antique ceramics include a Longquan celadon censer and a red porcelain vase, Yongzheng mark, as well as a cream-colored porcelain dragon bowl. 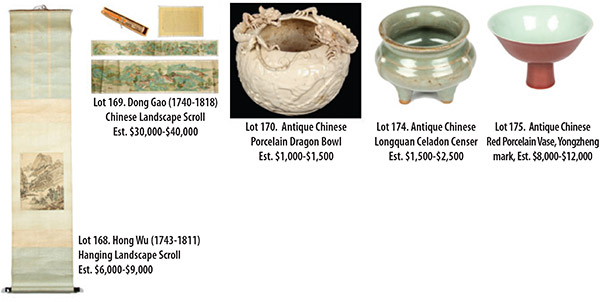 Sampling of other noteworthy highlights among the many offerings of folk, ethnographic art, antique textiles and rugs: