Artists We Have Known

Artists We Have Known

ARTISTS WE HAVE KNOWN

OUR ROSTER OF VERY SPECIAL PEOPLE 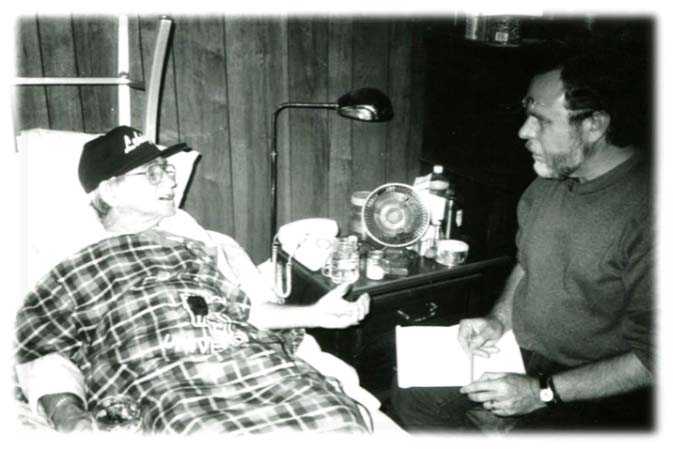 Norman with Howard during the late 80s (photo: R. Viera)

I. SOMEONE STRANGE THIS WAY COMES

My transformative and totally unexpected encounter with the emergent field of a maverick American art that “knows not its name” occurred in 1985 in Georgia. I refer to the movement in the 70s and 80s often called “folk,” “contemporary folk,” “self-taught,” or even “grassroots” art.  During one of my yearly trips to Atlanta from my home in Pennsylvania to visit my parents and siblings, one of my brothers enticed me into visiting a certain Baptist preacher-painter in north Georgia who claimed to be a prophetic stranger from outer space.  This was the flamboyantly charismatic, relentlessly garrulous, and impossibly prolific religious visionary preacher-artist Howard Finster who was at that time becoming the American godfather for a new category increasingly and controversially called “outsider art.” – that is, spontaneously expressive and often visionary art outside the schooled traditions of the mainstream artworld. 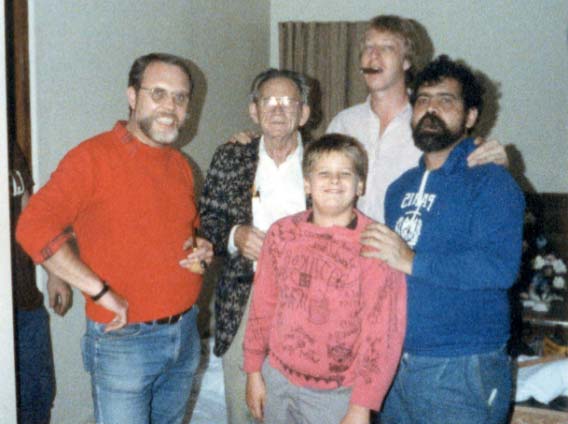 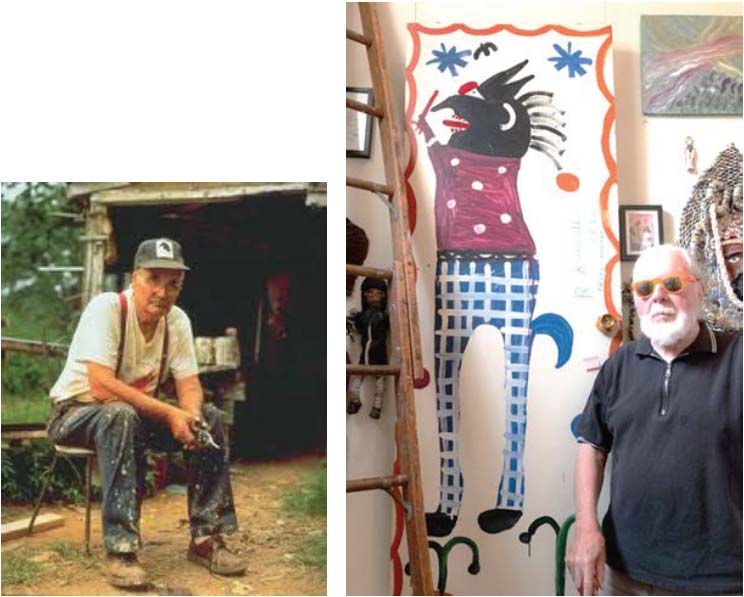 Confused yet fascinated, I witnessed Finster’s endless sermonic rants and tales of visionary journeys, and pondered the makeshift religious quirkiness of his (using his words) “bad and nasty art.” My world and my academic career as a comparative religion scholar focused on ancient Chinese Daoist mysticism were forever changed.  It was, in fact, this experience and what came afterwards that gave me the courage to seek out the liberating secrets of American strangeness as found in the curious nexus of religious experience and artistic creativity seen in many outsider and often visionary artists.

James Billie Lemming photos by N. Girardot (perhaps the gun that he used to
shoot himself as a target) 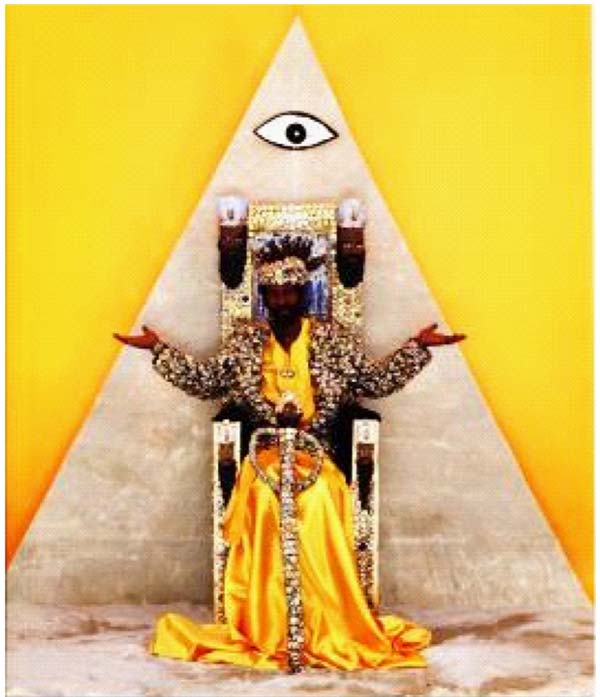 I continued to work dutifully on my Chinese mystics, but now I had a homegrown and oddly similar visionary to contemplate which quickly led me, along with my recently and now sadly departed colleague Ricardo Viera, to writing about Finster, giving conference presentations, and curating various exhibitions.  Various road trips to meet other artists (e.g., James Billie Lemmings, Volis Simpson, Clyde Jones, Purvis Young, Eric Legge, Teresa Gloster, William Thomas Thompson, Frank Pickle, Annie Wellborn) ensued. In the 90s, however, the other really important early influence on my interest in outsider visionaries was my 1991 chance meeting in Chicago with the African American Gregory Warmack.  His transformative and salvific visionary experience occurred when he was 30 on the mean streets of Chicago. Traveling back to an ancient Nubian Egypt, he became best known as the magic trash man Mr. Imagination who creatively scavenged and imaginatively recycled the discarded refuse of his urban world into a regenerative communal art.  Mr. I, as he was known to his many fans, eventually became a special friend to Diane and Norman. Moreover, as a kind of escape from the cold concrete landscape and personal pain of Chicago, he ended up spending almost ten years of his life in our little town of Bethlehem Pennsylvania.

IV. MR. I LEAVES CHICAGO AND BRINGS NORMAN AND DIANE TOGETHER IN THE TOWN OF BETHLEHEM PENNSYLVANIA 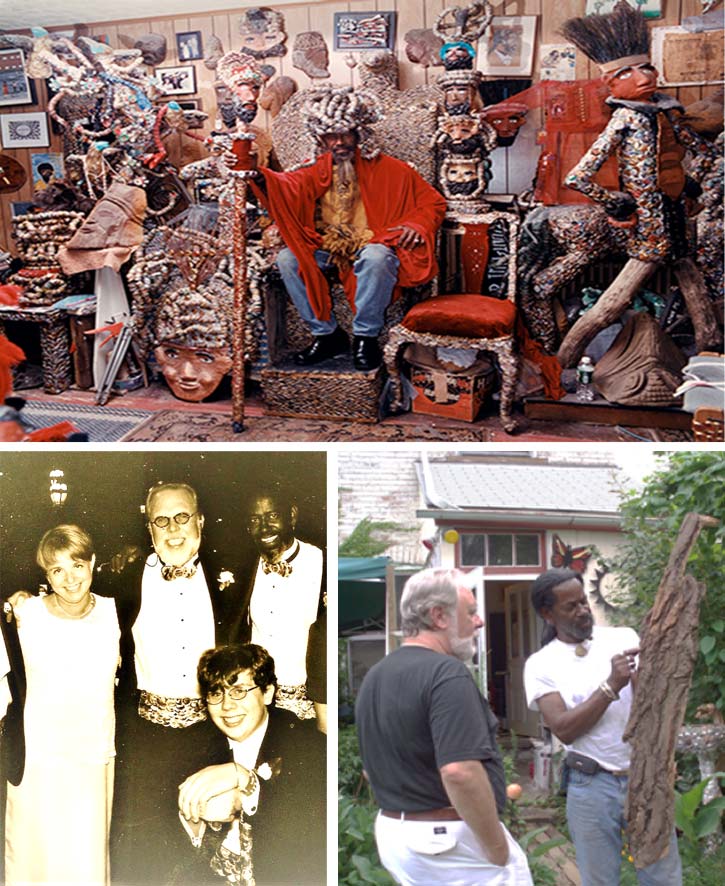 Top: Mr. I at his home on 4th St.; bottom (lft-rt) Diane, Norman, Mr. I & Chris at the wedding in 2002 (note the bottle cap cummerbunds; Mr. I was the best man), Norman and Mr. I at his second house after the fire (photos: top Ted Degener, bottom, Susan Pollack, N. Girardot) 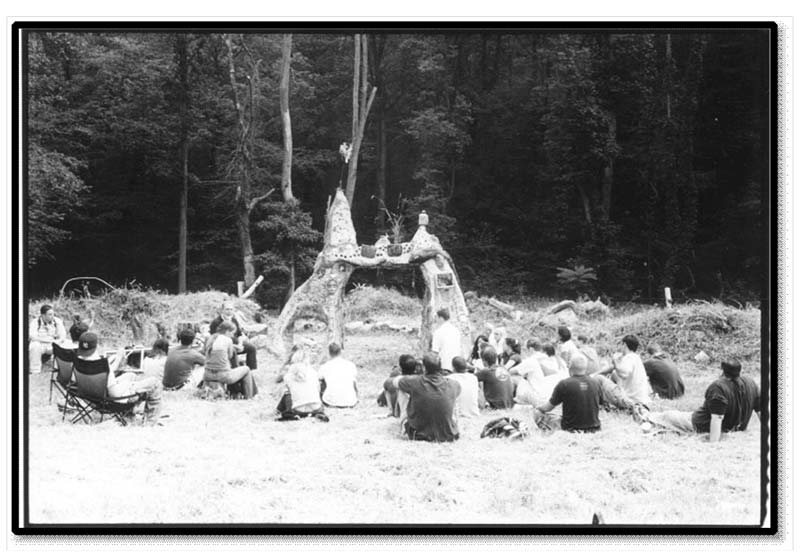 By the turn of the millennium, I had been writing extensively about various outsiders and had initiated an unusual new course at Lehigh entitled “Raw Vision: Creativity and Ecstasy in the Work of Shamans, Mystics, and Outsider Artists.” Mr. I was invited to be the first “artist in residence” to lead the class in creating an outdoor art environment or “outsider enclave” at Lehigh University.  This led to a major end-of-the-millennium exhibition at Lehigh involving the four incongruous amigos of Mr. I, Charlie Lucas, Lonnie Holley, and Norbert Kox. At the same time, under the leadership of Diane, Bethlehem’s community arts center known as the Banana Factory also started to show Mr. I’s work as well as other outsiders (e.g., Danielle Jacqui); and then later Diane created another innovative community art center in Reading known as the GoggleWorks which put on several pioneering exhibitions of outsiders like Mr. I, Justin McCarthy, and Paul Lancaster.  For the past ten years Diane has been the CEO of the Lehigh Valley Charter High School for the Arts nationally recognized as a “Blue Ribbon School of Excellence.” Coming from an architectural background, Diane has always been a pioneering educational leader devoted to supporting artists and the arts as a vital aspect of any community. During these years, Mr. I, along with Charlie Lucas, brought Diane and Norman together as not just professional colleagues but as life partners which led to marriage in 2002 with Mr. I as the best man wearing a bottle cap bow tie and cummerbund. Even more than earlier in our working relationship, we continued to collaborate on bringing outstanding outsider artists and their art to our various educational and civic communities in eastern Pennsylvania. This work extended to New York and Philadelphia, as well as Baltimore, Washington DC, Chicago, Atlanta, and London.  Indeed, it should be noted that Mr. I spent considerable time at Material Culture in Philly and hung out with Twins Seven Seven there.  This led Norman create a refreshingly peculiar one-time course at Lehigh with both Twins and Mr. I in residence. 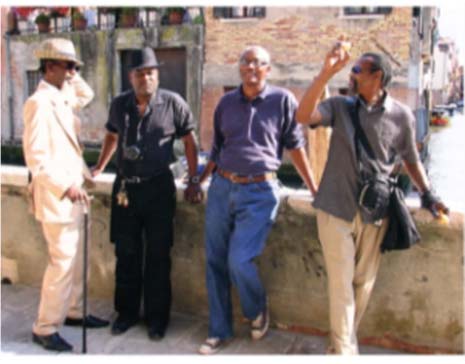 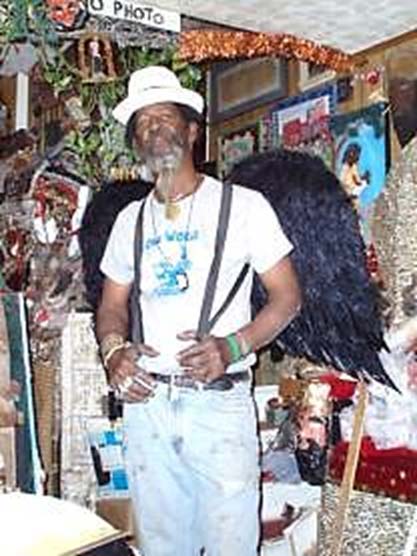 The Angelic Warmack with strap-on wings in his house in Bethlehem c. 2006-7
Photo: Norman Girardot

V. FROM BETHLEHEM TO ATLANTA AND VENICE AND THEN BEYOND

Gregory Warmack’s career as Mr. Imagination mirrors and anticipates many of the volatile developments within the overall outsider art world in the United States. Unfortunately, he died prematurely right at a moment when the outsider art world was achieving some notable mainstream acceptance at major museums and art centers in Washington DC, New York, Chicago, San Francisco, Los Angeles, and Atlanta. Warmack’s evolving trajectory as Mr. Imagination is remarkable in terms of his early recognition and outsider celebrity while at the same time his life and career was constantly punctuated by periods of trivialization, dismissal, and tragedy.  And these trials and tribulations were most acute after the tragic fire in his rented Bethlehem house in 2008, his sadly difficult move to Atlanta, and the roller coaster of renewed glory, disappointment, and death that came rapidly afterwards.

Really haunting is that after the difficulties of the move to Atlanta, there was a triumphant street-art invasion of the Venice biennale in 2011 organized by the resourceful New York art dealer Martha Henry and involving the four happy African American amigos of Warmack (dressed so resplendently in hipster white with a cane and rakish hat), Kevin Sampson, Charlie Lucas, and Lonnie Holley.  All four of these artists had suffered bouts of tragedy and despondency throughout their lives, but the camaraderie and response to their Italian adventure seemed to signal a new-found international fame.  Lucas, Sampson, and most notably Holley have gone on to increasing recognition. But shortly after Venice, Warmack at the age of 64 tragically found himself ignominiously suffering in a hospital in Atlanta without the invincible protection of his bottle cap persona and metallic armor. Norman at that time was taking students to China and last spoke with Mr. I by phone from Shanghai.  His voice was weak, but his spirits still soared, and he talked about finishing his angel park in Atlanta when he got out of the hospital. 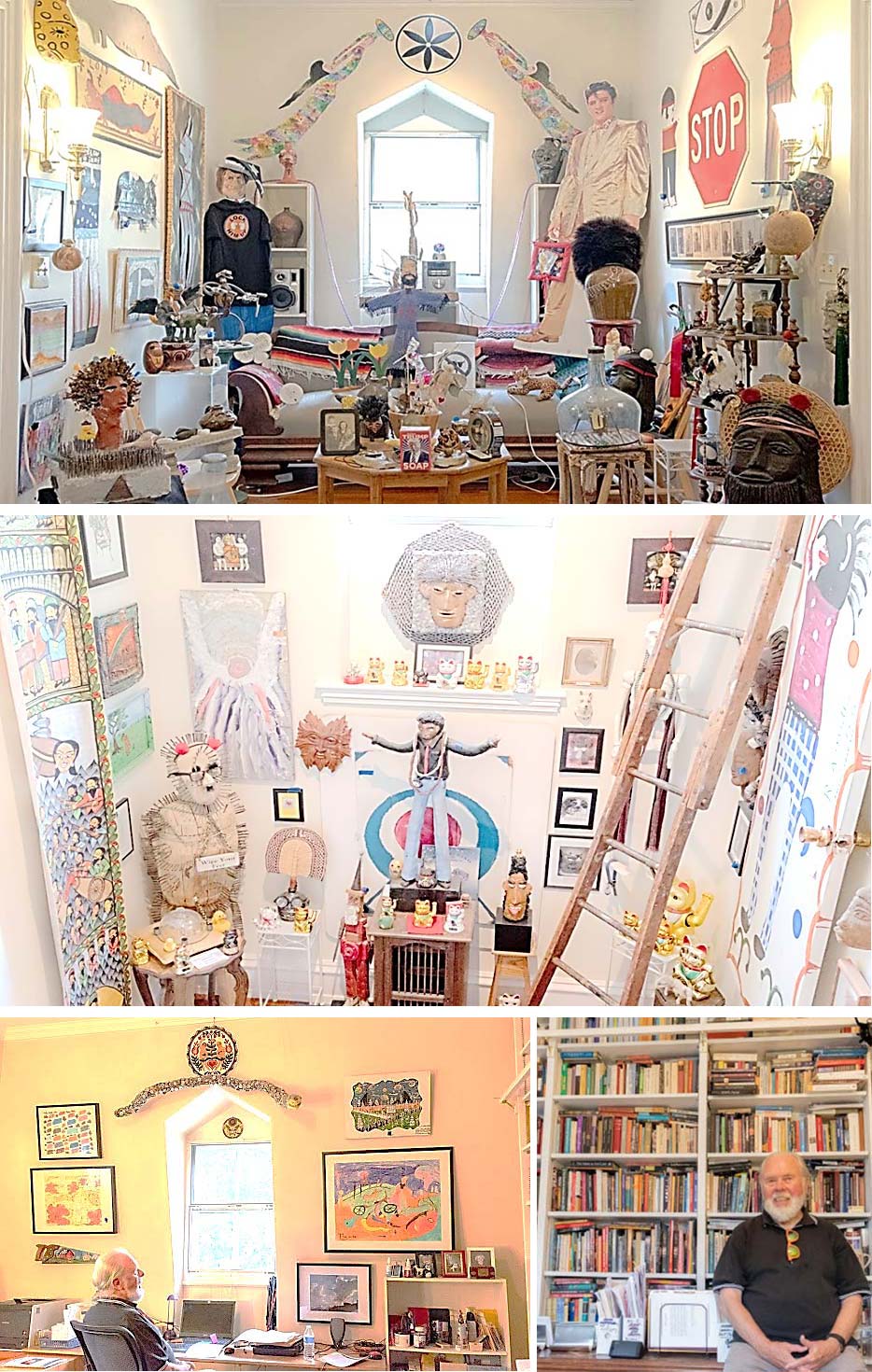 Norman Creates his own Other Worldly Environment; Some Views of the Third Floor Odditorium. (photos: Ron Yoshida)

VI. OUR HOME AS A REPOSITORY OF THE HUMAN IMAGINATION

All of the artists in this auction were our friends in different ways and both of us as educators greatly appreciated knowing them and the way their presence and work inspired us, our children, our students, and the general public. Most of all, we have appreciated the transformative power of their creative spirit as expressed in their art and in their stories about themselves and their work– often stories of pain and renewal where the ugly became beautiful, the lowly became high, and the ordinary became amazing.  We have never really thought of ourselves as collectors of objects, no matter how glorious or prosaic, dramatic or mundane, strange or ordinary those objects might be. Indeed, our house is primarily our very personal and often whimsical repository of the human creative imagination and includes contemporary mainstream art alongside an eclectic range of outsider works and other assorted ethnic art, folk art like southern and northern face jugs, many maneki neko waving cats, miscellaneous gourd art, Chinese scroll paintings, Elvis art, and (especially on the 3rd floor odditorium of our house) many other wildly strange and curious objects. With regard to all of this art, whether high or low, the monetary value has never been our primary concern. We ask only “why and what did it mean to the artists” and “why does it mean so much to us?” To turn Oscar Wilde’s prescient dictum upside down, it can be said that the quirky spirit and beating heart of this art is fundamentally grounded in the “human value of everything, not on the price of anything.” It has to do with the regenerative and sometimes revelatory spirit embodied in the lives of the artists and as manifest in their art.

Now as we stumble into the second decade of the 21st century, outsider art (or whatever we call it) shows every indication of being accepted as one of the most important unconventional, against-the-grain, avant-garde, “outlier” or “vanguard” traditions in the overall world history of art. It’s not fine or high art in the narrow Western sense of those terms, but it is certainly and truly “art.”  At its best, the special power of outsider art is that anything and everything can have meaning and value, qualities that are primarily a gift of the creative human imagination. And as some visionary artists might say, to use your imagination is a kind of shared cosmic consciousness with what the Chinese would call the Dao.  It is in this sense that these gifts of the spirit need to be shared. And the time has come in our lives to give some of these gifts, these spirit fraught talismans, to a larger circle of receptive friends, interested bystanders, and cosmic ombudsmen who respond to this provocative art. Like seeing a vibrant rainbow shine forth from the mist, this is an art that will surprise you, perplex you, amaze you, and amuse you. Maybe even disturb you.  But the real promise of this art is simply that It might also (if you let it) enlighten and transform you.

Selections from the Collection of Norman Girardot and Diane LaBelle 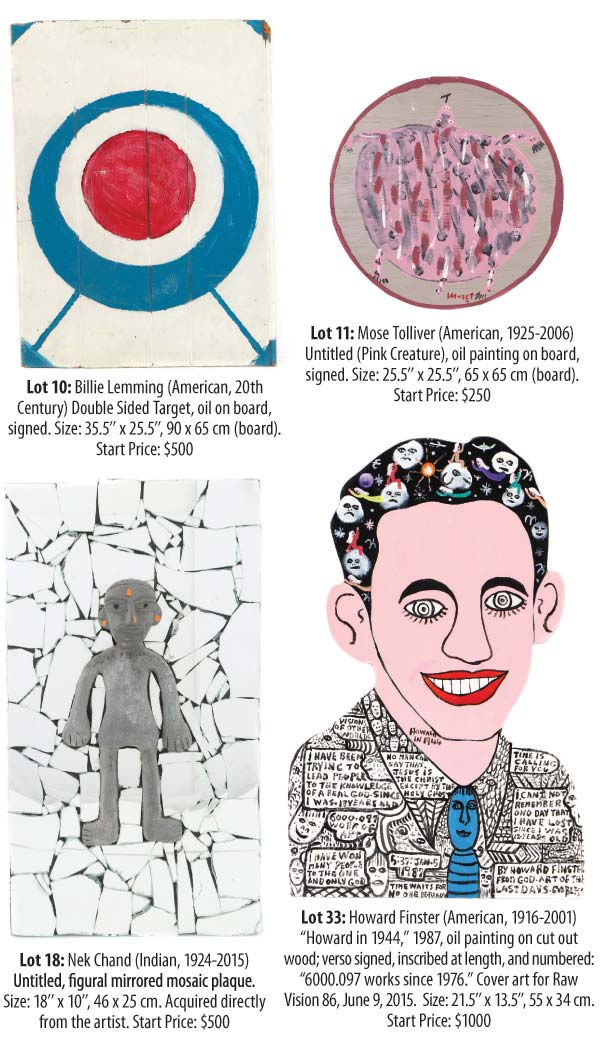 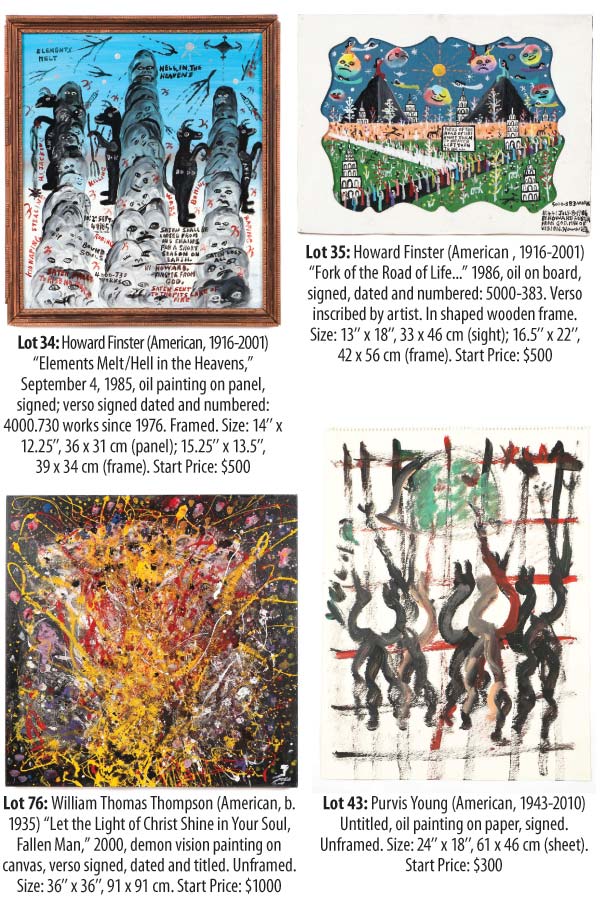 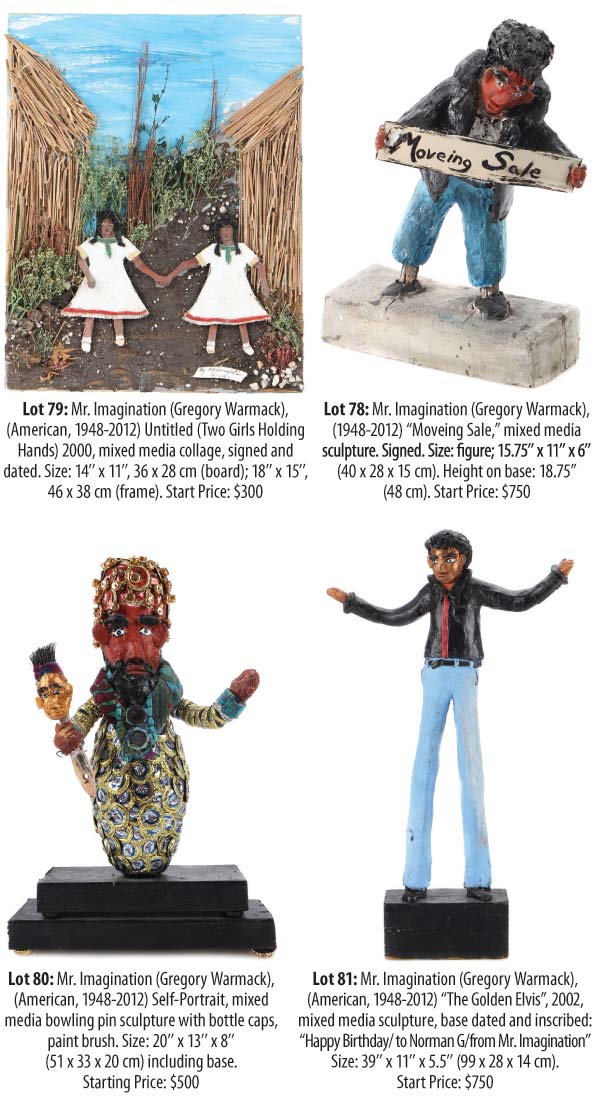 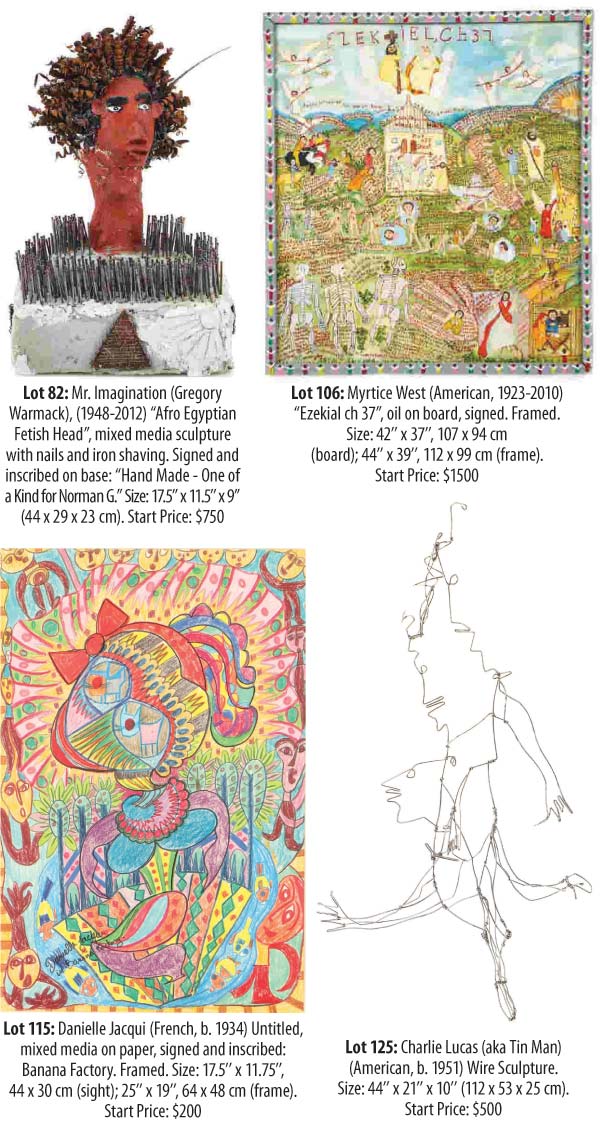 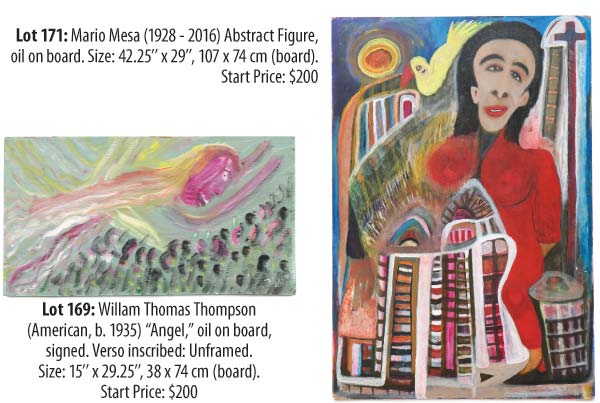