Browse the Auction Catalog on LiveAuctioneers.com 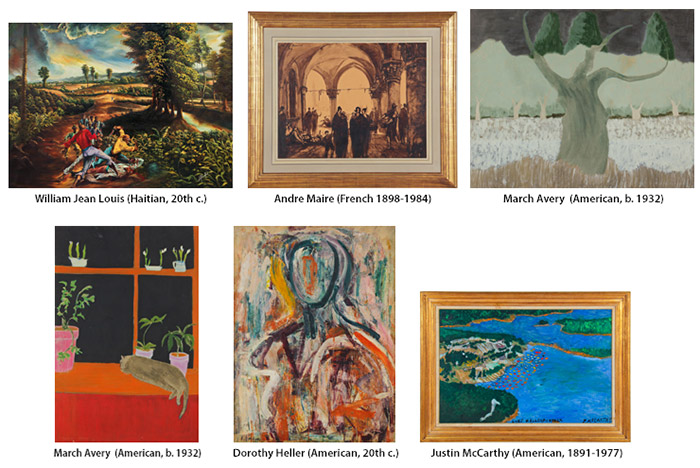 Material Culture’s July 18 auction, “Fine, Self-Taught & Outsider Art,” provides a stage for many categories of art across its 564 lots. The auction house, a leader in folk and self-taught art, brings forward the work of many such artists in this sale, from the United States and around the world. Fine art consists primarily of American and European paintings, prints, and works on paper from the 19th century through the present day.

The sale commences at 10 AM, EST, on Friday, July 18, with Live Auctioneers providing live internet bidding. This diversity of art will be exhibited, free and open to the public, in Material Culture’s gallery space July 16-17, from 11 AM to 5 PM.

One of the leading artists in fine art is American painter March Avery (b. 1932), daughter of Milton Avery. Trained by her father, March’s work displays the focus on color relation, rendering the representational also abstract, that made Milton’s work so important amongst his colleagues Mark Rothko, Barnett Newman and Marsden Hartley. The younger Avery’s finest works at auction are the 1966 oil on canvas painting “Hadrian’s Olives” (lot 414) and the 1975-77 oil on canvas board “Catnap” or “Caleb and Friend” (lot 418). Another 20th century female American painter shown at auction is Dorothy Heller (1917-2003), represented by a work of oil on canvas, a portrait of a woman in long, abstract expressionist brushstrokes (lot 419).

Material Culture’s sale also showcases the work of Hans Christoph Drexel (1886-1979), a German artist whose successful early career was quashed by the Nazis. Denouncing his work as degenerate, the Nazi censors forbade him to paint.  Like many German artists of this period, Drexel’s art has remained largely hidden from view. The present works were discovered in the estate of  Drexel’s godson, Dr. Christof Heinicke, and include a range of works from pre WWI to post WWII.  His nine works at auction highlight his mastery of watercolor and his expressionistic use of pastel. Perhaps most striking is his untitled work of watercolor, gouache and pastel on paper, depicting a black bird in flight under an equally dark sky, separated by folk buildings and a watchtower in bright yellow and blue (lot 126). In addition to landscapes, several portraits by Drexel come to auction, the faces in them at once familiar and unsettling (lots 124, 130, 131). Another German-born artist featured at auction is Albert Urban (1909-1959), with six lots of his abstract compositions dating to 1945. Nearly-recognizable forms leap and recede from the geometrical webs of these ink on paper drawings, both colored and black and white (lots 386-391).

Exceptional works by self-taught artists will be on offer. Eleven lots by Purvis Young (1943-2010), a native of Miami, displays the artist’s marriage of assemblage and painting, as in the untitled piece that unites masonite, cardboard, fabric and wood as surfaces for painted figures and buildings (lot 36). The artist’s common themes of the African-American experience and urban life are seen in many of the paintings at auction. American self-taught artist Justin McCarthy (1891-1977) is shown in three paintings that exemplify his variety of subjects. “Christ Carrying the Cross” (lot 27), a strolling couple in “University Campus” (lot 28), and a landscape of “Lake Wallenpaupackke” (lot 29) are all rendered in McCarthy’s bright color and exuberant line. A portrait of McCarthy (lot 31) by another notable self-taught American artist, Jack Savitsky (1910-1991), shares the provenance of the McCarthy figural paintings, coming to auction through the collection of Patricia L. and Morris C. Thompson.

Displayed first among self-taught artists is Ghanian painter Kwame Akoto or “Almighty God,” born in 1950. The eight lots (17-24) by this famous street artist exhibit a number of the subjects for which he has become known, including depictions of animals with a moral theme or anti-smoking message, spiritual or political allegories, and portraits, from his daughters to African Kings. The auction also features a wealth of self-taught art, comprising forty-five lots, from the Living Museum, which fosters the creative talents of the patients of the Creedmoor Psychiatric Institute. Several of the Museum’s star artists, including Issa Ibrahim (b. 1965), Richard A. Smith (b. 1947) and John Tursi (b. 1961) are highlighted in this auction. Ibrahim blends pop culture such as cartoons and action heroes with political messages or erotic situations; his leading pieces at auction are “Justice League” (lot 84), a large canvas depicting President Obama, Michelle Obama and Joe Biden as Superman, Wonder Woman and the Green Lantern, and a painting of Michael Jackson with mixed-media collage (lot 85). Smith’s erotic drawings play with proportion and are often colored with food products, such as mustard. Eight lots by Tursi exhibit the artist’s use of prismatic color and vibrating contrast in the geometrical construction of his surreal faces. Other American self-taught artists shown at auction include Mose Tolliver (1925-2006), Richard Burnside (b. 1940), Barbara Strawser (20th century), Missionary Mary Proctor (20th century) and R.A. Miller (1912-2006).

A strong collection of Haitian art at the sale is led by three pieces by Georges Liautaud, frequently regarded as the artistic father of all subsequent metalwork in the country. The steel sculptures at auction are two-dimensional renderings of sprightly people, goats, or the two together (lots 63-65), and their provenance includes the Thompson collection, as above. Among Haitian painting and prints, “The Massacre,” by William Jean Louis (20th century) stands out (lot 66). The savagery of the title’s action, at bottom center, is offset by the breathtaking beauty of the landscape that surrounds.

Other highlights of the auction include over thirty lots of Japanese woodblock prints, with pieces by Utagawa Hiroshige (also known as Ando Hiroshige), Katsushika Hokusai, Utagawa Kuniyoshi, Utagawa Toyohiro and Utagawa Kunisada. A group of eight Asian painted panels, tree-filled landscapes populated with animals such as cranes and deer, will be auctioned together (lot 342). The auction also opens with a series of vintage posters, led by a linen-backed lithograph of a Brigitte Bardot film (lot 1). Made for distribution in Italy, the poster bears the title “Piace a Troppi,” for the 1956 French film “Et Dieu…crea la femme” (“And God Created Woman”).