Exhibition: Artists From the Center for Creative Works

Exhibition: Artists From the Center for Creative Works

A variety of work by artists from the Center for Creative Works, including paintings, drawings, ceramics and mixed media pieces, are featured at an exhibition and sale in our mezzanine gallery.

About Center for Creative Works 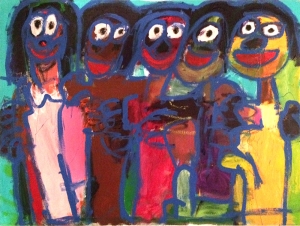 The Center for Creative Works is a progressive art and design studio in Wynnewood PA. CCW provides guidance in materials and techniques to adults with developmental disabilities. Professional artists work to encourage participants to build portfolios, exhibit and sell their work. CCW promotes their work through our website, exhibitions, and other venues. A participant can find self-expression here using mediums ranging from painting and sculpture to video or music and does so in a supportive, self-directed environment free from criticism and pressure. These participant artists show their work throughout the region and have participated in Outsider Art Fairs in New York and St Louis as well.

Design work of CCW artists is used in in-house generated creative products such as cards, textiles, ceramics and wood working. CCW strives to offer our artists opportunities to define themselves through their artistic expression and contribute to the greater community by sharing their unique human experience though visual expression. 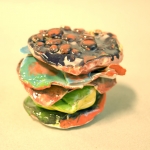 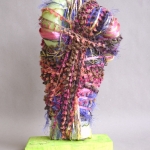 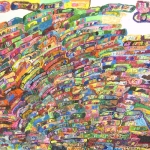 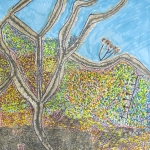 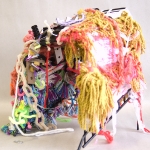 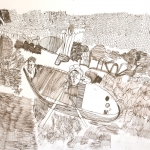 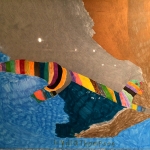 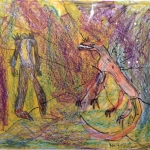 Tammy Byerly
Prior to her recent exploration in creative expression, Tammy spent years expertly operating a paper shredder, diligently feeding one sheet after another into the machine. The disposition that enabled her to excel in shredding, and attain a sense of calm through its repetitive process, informs her approach to artistic expression. When Tammy works, she becomes absorbed in meticulous mark making. Typically, she first lays out a piece’s larger elements and then gradually connects them with networks of spindly lines and smaller shapes.

Jenny Cox
Jenny’s exuberant compositions are achieved through intense focus and methodological execution. The text she employs in her works have their origins in both stream of consciousness as well as specific selections that lend themselves to a larger narrative. Jenny has been painting and drawing at the Center now since 2012.

Cindy Gosslin
Cindy, though diminutive in stature, is an energetic creative force who is in near constant motion throughout hers days at the Center for Creative Works. The combination of her limitless energy, cheerful personality and a need to be busy has produced an impressive body of work. Because Cindy is blind, she relies almost solely on her sense of touch to construct her artwork. The pieces on display here are a mix of materials (yarn, string, cloth, masking tape) that begin as windings that grow into shapes of varied sizes and complexities. The look of Cindy’s sculptural objects is the product of very busy and creative hands.

Olin Johnson
Olin has been making artwork at the Center for over three years, and is one of our most prolific artists. His ever-evolving body of work relies on his intense desire to represent subject matter in compartmentalized constructs. Lines, dots, shapes, and colors are all seen as individuals, and occupy specific locations in his compositions. Though the images he creates are skewed, they are all composed with a specific intent of spatial inhabitance.

Tara Johnson
Tara Johnson’s drawings and watercolors are meticulous distortions of photographic imagery. The subjects she chooses to work with range from animals, celebrities, and friends. Tara’s use of dense meandering line, patterns, and color applications, enlivens her compositions and illustrates the very personal nature of her work.
Jason McGonigle
Jason expresses his tremendous artistic talent and mind by employing spatial techniques and concepts using markers to create his designs with content often rooted in his own personal interests. Through his continuing growth and development as an artist, he has learned to fill in negative spaces that were left empty in his earlier work, making his art even more appealing and complete.

Tim Quinn
Tim Quinn’s geometric abstractions are all based in a gridded structure. His need to efficiently fill the page is the driving force behind his work. Though Tim’s pieces are purely abstractions, the imagery can make reference to landscapes, sheet music, architectural forms, and circuit boards. His persistent use of line, form, color, and shape are genuine reflections of his personality.

Julian Roach
Julian employs concepts of transfer in his artistic techniques. He begins by taking an image or work and mimicking it as a base for his process of evolving the art to create a new work. While he uses outside images to form the core of his work, when he transfers it to paper, he develops ownership to his work through his additions as it transforms into an entirely new image.

John Serrano
John utilizes a variety of techniques as part of his art making process, from collage to painting, as well as sculpture. No matter which of these modes he chooses to operate in, color is at the core of his practice. An intricate lattice of color relationships and applications holds each of his pieces together. When working abstractly, John formulates his compositions through a patchwork of paper, tape, and chroma, resulting in energetic yet gentle pieces. John has been making work at the Center for little over a year.

Brandon Spicer-Crawley
Brandon excels in a range of artistic methods. He utilizes paper, cardboard, paints, watercolors, pencils and ceramics to create works in both the 2D and 3D formats. Much of the content in his art is derived from his own mind and imagination as he creates his unique works.

Carl Trunk
Carl is amongst the Center’s most creatively diverse participants. He is both confident and capable in any artistic medium whether it’s drawing, ceramics, video or music. Storytelling is at the core of his creative practices with his dream-like drawings, iconic sculptures, deep sound layering and an affinity for aliens, monsters and heroes all being part of Carl’s darkly comedic narrative.