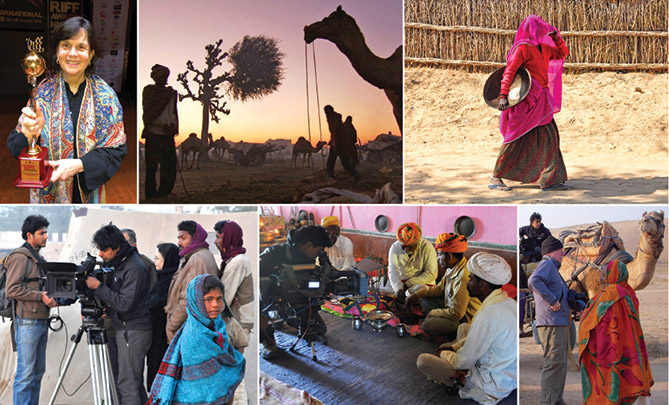 In Rajasthan is an intimate look at a disappearing culture in one of India’s most traditional states. It is the story of two families, one Hindu and one Muslim, living in an ancient village in the Thar Desert whose lives have been interwoven for thousands of years with the Rajputs, once their feudal lords and protectors. They speak candidly about marriage, their qualms about their spouses, the caste system, the dubious future of children exposed to the modern world, the afterlife, and the religious differences between them. Today, their traditional way of life is besieged, but their struggles with family, allegiance, religious conflict and death seem timeless.

The film is an international collaboration of crew from India, England and the US. It includes internationally acclaimed actor Kabir Bedi as the voice of the storyteller who frames the story, Andrew T. Mackay as the composer of the music score, and Katherine Kingsland as the director/producer.

Katherine has worked as a journalist for US and international television networks including ABC, CBS, NBC, PBS (National Geographic) reporting and producing news and features on topics ranging from foreign wars to US presidential elections to American culture. She studied English Literature at Washington University, French Literature at College Littéraire in Avignon and Psychology at Harvard. In Rajasthan is her first independent theatrical documentary film.

IN RAJASTHAN Trailer from 1000 Suns Films on Vimeo.