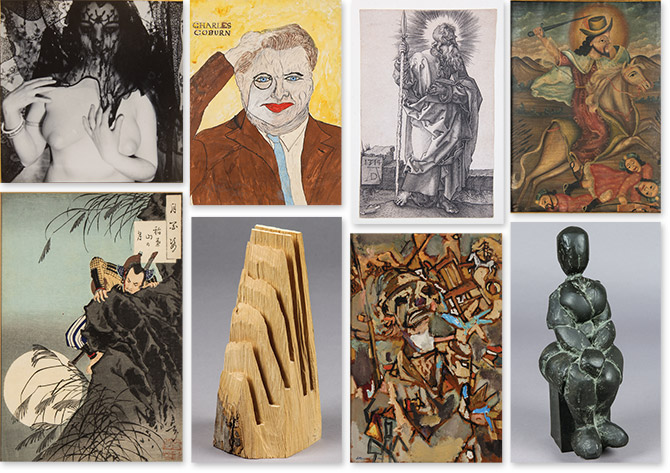 Browse the Auction Catalog and Bid Live on LiveAuctioneers.com

Material Culture continues its commitment to an appreciation of art across all categories, unified in its upcoming auction, “Fine, Folk & Self-Taught Art,” on October 12, 2015. A great diversity of style, media, time period, and culture are shown in the more than 700 lots, drawn from regional, national and international estates and private collections. Paintings, drawings, and prints from fine and self-taught artists are augmented by photography, sculpture, and collections of Haitian Vodou flags, Mexican masks, and Japanese prints.

Additionally, a portion of the proceeds from the sale of many designated items in the auction will go to benefit the Sterling Strauser Gallery of East Stroudsburg University. Sterling Strauser (1907-1995), alternatingly an impressionist, expressionist and modernist, painted the surroundings of his native Poconos region, his style at once progressing with the century and remaining inalterably his own. Strauser is important not only as an immensely prolific artist himself, but as a champion of other artists. A group that became known as the Strauser Circle consisted of self-taught artists in whom Strauser saw particular ability or vision, and he worked tirelessly to awaken the art world to the talents of Justin McCarthy, Jack Savitsky, Victor Joseph Gatto, Joe Polinski, Tom Fish, “Old Ironsides” Pry, Charlie Dieter, Red Grooms and Nancy Hebard, among others. The auction also seeks to highlight the work of Sterling Strauser and the Strauser Circle by offering pieces by many of these artists for sale. Strauser, for example, is represented by twenty-two paintings of varying subject matter. Of the self-taught artists he discovered and encouraged, the most prominently featured are Justin McCarthy (1891-1977) with twenty-four works, and Jack Savitsky (1910-1991) with twenty-six works.

Unquestionably, one of the auction’s highlights is an original 1962 edition of Jack Smith’s “The Beautiful Book.” An actor, photographer, and filmmaker, Jack Smith (1932-1989) was a seminal figure of American performance art and underground cinema. His most famous film, “Flaming Creatures” (1963), was immensely formative for both drag culture and the artistic styles which came to be known as ‘camp’ and ‘trash.’ “The Beautiful Book,” his only autonomous photographic publication, was created right before the filming of “Flaming Creatures.” Original copies of the book are extremely rare, since Smith only created a single edition of approximately 60 copies, many of which have been lost. The book consists of 19 contact photographic prints on yellow paper, assembled by hand by Smith and his colleagues, with a silk-screened cover designed by Marian Zazeela, an artist who appears in almost half of the photographs. Other photographers represented in the auction include Naomi Savage (American, 1927–2005), Paul Rowland (American) and John Loengard (American, 1934) . Modern Chinese art includes offerings by several contemporary artists, including Qiu Deshu, Guo Zhen, and Wang Longtai. Qiu Deshu has inspired international recognition since the 1980s. His study of traditional ink painting and seal carving as a youth was interrupted by the Cultural Revolution, when he was sent to work in a plastics factory. In the 1970’s, he resumed his study of ink painting and co-founded one of China’s first experimental art movements in post-Mao China, the Grass Painting Society. The piece offered at auction was acquired from the artist in Shanghai in 1990. It is signed in both English and Chinese and stamped with the artist’s seal. It is part of Qui Deshu’s long record of working with torn paper and acrylic paint on canvas, and is finished with red seal petroglyphs pressed into a circle at the center of the painting. This particular painting is remarkably similar to one titled “Center,” featured on page 110 of the Shanghai Art Museum’s 2008 catalogue for the solo exhibition titled “Cracks—Qiu Deshu’s Modern Water and Ink Exhibit at the Shanghai Museum.”

In self-taught art, numerous artists bring multiple pieces to the sale. Miami-based artist Javier Mayoral puts his comic genius on display in a number of his original works, in which his bright, surreal images are hilariously juxtaposed with explanatory captions. One of his paintings at auction reads “I LIKE TO DRESS MY DOG AS A CUTE FRENCH SAILORETTE” above a small white dog who looks none too pleased to be dressed as described. An enticing selection of a different kind comes from another Miami native, Purvis Young (1943-2010), whose paintings on found media, often expressing the Southern African-American experience, includes the exceptional “Celebrate Their Life,” in an array of joyful pink, purple, blue and yellow. William Hawkins (American, 1895-1990) is represented in three of his drawings on paper.

Pieces by three self-taught masters working in American folk art traditions, Elijah Pierce (1892-1984) David Butler (1898-1997), and Fred G. Johnson (1892-1990) bring their spirit to the sale. A painted wood carving of the name “E. Pierce” appropriately represents the former artist, while Butler’s characteristic animals made of painted cut tin include a polka-dot rooster and an imaginative squirrel on a tree. Fred Johnson has been called the “Picasso” of circus art. His banner, painted in the mid 1970’s for O’Henry Tent and Awning company of Chicago, is illustrated on page 132 of “Freaks, Geeks, and Strange Girls” (Last Gasp, San Francisco, 2004). Commissioned by Walter Wanous as part of the banner line for a traveling “Dope Show”, Johnson came out of retirement to paint the banner line as a favor to this long-time client and caps a career begun in 1907.

A particularly strong showing of Haitian art also enriches the auction. Louisiane Saint Fleurant (1924–2005), credited as the founder of the peasant Saint Soleil movement and often called the most important female Haitian artist, is represented by a painting of a maternal spirit seeming to bless or protect a row of small people, possibly children, at the bottom of the canvas. Two paintings by Andre Pierre (1916-2005) depict the Vodou loa, or intermediary spirits, that were frequently his subject matter. Nancy Josephson, artist, musician, and the acclaimed author of “Spirits in Sequins: The Vodou Flags of Haiti,” will be selling a number of sacred flags, or ‘drapo vodou,’ from her collection, and the sparkling array of Vodou flags includes pieces by Yves Telemaque, Amina Simeon, George Valris and Maxon Scylla.

The sale also debuts the work of a newly-discovered self-taught artist, John J. Stanko (1925-2014) of Pittsburgh, Pennsylvania, in a group of his carvings. Primarily a wood carver, Stanko also painted and created sculpture out of many different kinds of repurposed media. His need to support his family—even from a young age, as the eldest child of Ukrainian immigrants—meant he worked for most of his life as a crane operator at a steel company, but he was driven by a continuing passion for creating. His full and varied life included serving in WWII, holding six U.S. patents for his inventions, acting as President of the United Steelworkers Union for 16 years, and an enthusiasm for architecture that led him to build his own house for his wife and family.

Several other series of artworks from prominent collections help to expand the global nature of the sale. The long-established DeHoogh Gallery of Philadelphia, well known for its Asian art in particular, has contributed a group of antique Japanese prints. A selection of Mexican masks come to auction from the collection of Rev. Richard and Jean Kellaway of Fairhaven, Massachusetts, which formed the backbone of the travelling exhibition “Mexican Masks of the 20th Century: A Living Tradition,” created by the Danforth Museum. These vintage and antique masks embody many of the classic types in Mexican folk art, including carnival masks, devil masks, animal masks, and masks for particular festival dances, such as the Dance of the Dandies, and the Dance of the Moors and the Christians. Also particularly prominent in Mexican masks at auction are several pieces by Juan Horta Castillo (d. 2006), largely regarded as one of the finest mask makers in Mexico in the latter half of the 20th century.

The auction is slated to begin at 10 AM, on Monday, October 12, with an exhibition in Material Culture’s gallery space held over the immediately preceding weekend of October 10-11. The exhibition is free, and open to the public between 11 AM and 5 PM.