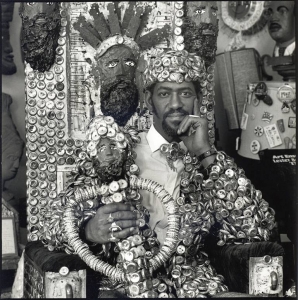 Mr. Imagination in the midst of his creations, including a bottlecap throne, suit, and figure.

Renowned folk-artist and friend of Material Culture Gregory Warmack, known as Mr. Imagination, passed away on May 30, 2012 in Atlanta, Georgia, at the age of 64. Spiritual and prolific as an artist and warm and thoughtful as a man, he saw the untapped possibilities in everyday or discarded objects, transforming them into spectacular works of art. At times whimsical and at times commanding, his pieces always have an individual force and an animating presence.

Born in 1948, the third of nine children in a religious family on the South Side of Chicago, Warmack had an early connection to art. A self-taught artist, he honed his creativity through his teens and twenties by making jewelry, carvings, canes and hats that he would sell on the street and in local venues. But his life was forever changed in 1978, when he was mugged, shot and left to die on the street. While doctors fought to save him, he had a near-death experience in which he was taken back in time to see ancient civilizations, including images of African masks, Egyptian kings, and grand thrones. When he revived, the visions inspired him to dedicate his life towards the creation of art with spiritual power and and a positive restorative force that could make people happy. Two years later, he christened himself Mr. Imagination, a title befitting his joyful, explorative artistic purpose. 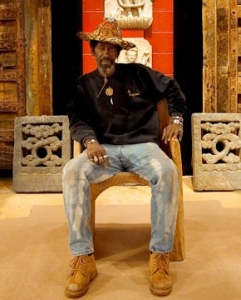 Mr. Imagination at Material Culture in 2005, sitting in the West African Asoso chair that he was commissioned to turn into a throne.

Indisputably, many of his visions from his near-death experience resonate in his work. He soon picked up one of his signature materials—old bottlecaps—in the creation of majestic thrones and flamboyant figures, as is seen in the picture above. He also discovered sandstone, an easily-carved industrial castoff that he sculpted into Egyptian kings. Any found object—an old rake, a stiff paintbrush, a ping-pong paddle—could be animated to new life. His first exhibitions were at the Charles Hammer gallery in Chicago, a specialist in “outsider” art, and by the mid-1990s, he was shown in galleries across the country and in museums such as the Terra Museum in Chicago, The Smithsonian Institution in Washington DC, and the Visionary Art Museum in Baltimore, amongst others.

In 2002, Warmack moved to Bethlehem, PA, having been an artist-in-residence at the Banana Factory in Bethlehem in 2000, and finding that the pace of life in a smaller town was beneficial to his creative process. It was during this time that Mr. Imagination became more well-known in the local arts community of Philadelphia, and Material Culture was privileged to carry his work. In 2005, Material Culture commissioned Mr. Imagination to create one of his famous thrones from one of our West African Asoso chairs. The artist spent a week creating the piece in the store, working from morning until night as visitors came by to watch the work in progress.

Warmack left Pennsylvania in 2008, following a terrible fire in his home that claimed many of his most prized artworks and several of his pets, and relocated to Atlanta, Georgia. He grew to be as much a part of the artistic community there as he did wherever he went, and a service will be held for him on Monday, June 4, in Atlanta. He is survived by his mother, is survived by his mother, Margaret Warmack, sisters, Cynthia Swopes, Carolyn Dennis, Valeria Cohen and Sandra Warmack, and two brothers, Dairao Warmack and Sherman Warmack. 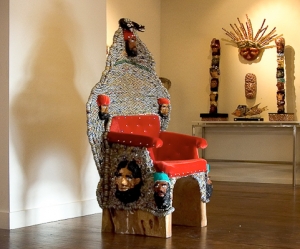 Mr. Imaginaton’s installation pieces can be seen adorning The House of Blues in Chicago, Orlando, Las Vegas and Milwaukee, the Millennial Folk Arch at Lehigh University, and the Elliot Donnelly Youth Center in Chicago, to name only a few; he left a trail of decoration behind him wherever he worked, and those living near Bethlehem can also see his work on a bus shelter and in the bathroom of Home and Planet. His works continue to be held in the permanent collections of The Smithsonian American Art Museum, Washington, DC, The American Visionary Museum in Baltimore, MD, the Museum of American Folk Art, New York, NY, the High Museum of Art in Atlanta, GA, and other institutions. Those in Philadelphia wishing to see some of his work can also always come by Material Culture, where the throne he made in 2005 is a permanent fixture.