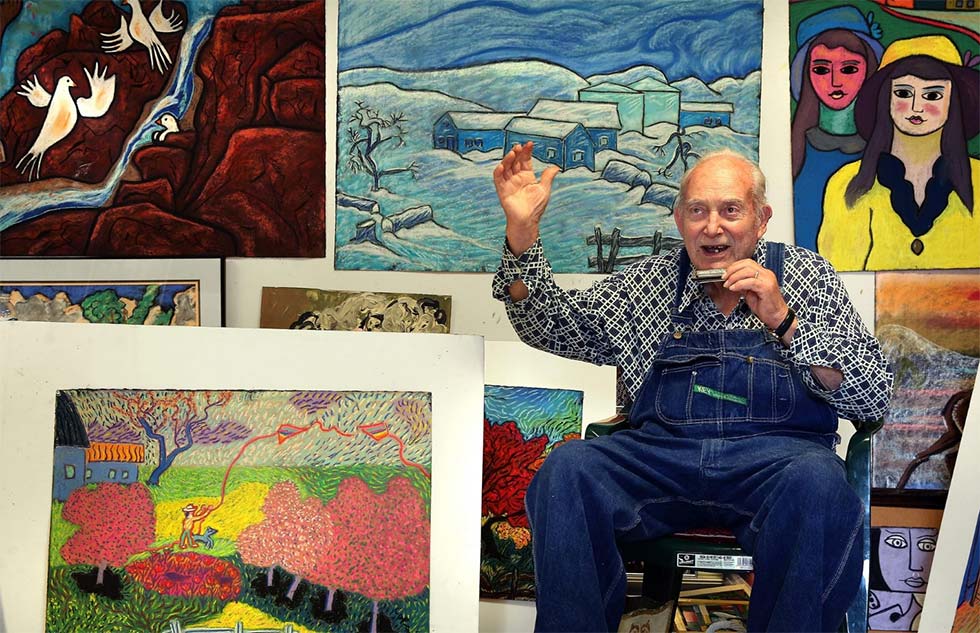 George Colin was a flour sacker at the Pillsbury Company in central Illinois for 30 years. He retired in 1975 on a pension of $100 per month to work on his art full-time. The holder of a certificate from a mail order art school, he worked from his home in a small town of 100 called Salisbury, Illinois. George Colin created a large body of work that is now almost legendary. When he was discovered in the 1980s, there was a barn on his property filled with 7,000 paintings and drawings. Many of the pieces in today’s auction are original barn paintings that were never sold or exposed to the general public before.

Colin was imbued with an insatiable will to create art. Unable to afford materials, he originally settled on chalk as his preferred medium as it was cheap and could be bought at the local five and dime. The paper he used early on was primarily wrappers from rolls of printing paper salvaged from the dumpsters of nearby printing plants. He also used the backs of discarded printed pieces. This material is referred to as “found paper.” It differs from the archival standard used in later works. After his “discovery” George began creating work on black Arches paper, a paper introduced to him by a dealer in Chicago. In 1989, the Georgeart Gallery opened in Chicago. It was a commercial gallery devoted to one man’s art, which soon developed an enthusiastic following.

George Colin was clearly influenced by great artists such as Van Gogh, Matisse, and Picasso. However, the images these artists conjured and inspired were rendered in his own distinct style. It has been said; he filtered these artists through a folk art mentality. Colin’s work can be found in many museums including the Museum of American Folk Art in NY, the Smithsonian, and numerous private and corporate collections. His work has been used as illustrations; for example, as the album cover for the Band’s 1998 album “Jubilation;” and has been the focus of many formal and informal exhibitions. Colin died in 2014.