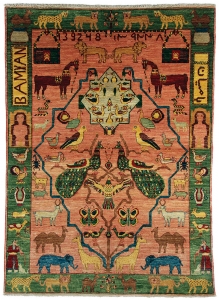 For the past 30 years, Afghan war rugs have been highly valued and internationally collected as pieces of modern folk art. These rugs, woven by Afghan village artisans since 1979 following the Soviet invasion of Afghanistan, depict images of the wars and conflict that have been a trademark of this country for the past three decades.

In an effort to both revitalize the Afghan economy and reshape its image from one of war to one of peace, Material Culture has partnered with a group of village rug producers in Afghanistan to launch the Peace Rug Project.

Working with the same village artisans who have been weaving images of tanks, guns and hand grenades for years, the Peace Rug Project has challenged these artisans to leave behind this imagery and weave instead images of peace. Small, folk-art sized wool carpets using natural dyes and depicting images of flowers, birds, animals, village life, and all manner of personal expression, have begun to emerge from Afghan villages and Material Culture is proud to bring them to the international market. This series of unique, one of a kind rugs, each depicting the weaver’s vision of the peaceful Afghanistan all hope will emerge from the conflict, aspires to promote peace by changing people’s image of the country and stimulate the economy by replacing “war rug” collecting with “peace rug” collecting. Begun last winter, our inaugural exhibition and sale represents a true opportunity for both rug lovers and folk art collectors to select and purchase from the first generation of thirty-five works, all of which will be on display.