The Individual and Tradition: Symposium and Book Signing

The Individual and Tradition: Symposium and Book Signing

Symposium and book signing:
The Individual and Tradition, Folkloristic Perspectives 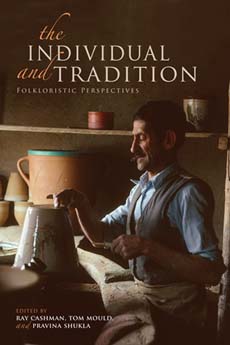 Material Culture invites the community to attend a symposium and book-signing centered around the book The Individual and Tradition: Folkloristic Perspectives, on Saturday, September 8. Containing a collection of essays by artists, writers and scholars in folklore and related disciplines, the volume focuses on the way in which creative individuals from around the world respond to societal and artistic tradition. The publication was conceived to honor renowned folklorist Henry Glassie, following his retirement from Indiana University after forty-one years of teaching and leadership in the field. More than a commemorative volume, however, The Individual and Tradition makes a strong contribution to folklore studies by tackling, in each essay, the central issue of the relationship between the legacy of craft and a single creative will. The essays explore the ways in which tradition inspires artists and performers to tell stories and narratives, write poems and sing songs, play music, craft pottery, weave rugs, carve stone or build boats, among other examples. Discussion of some of these essays’ topics will form the backbone of the symposium, specific illustrations that serve to celebrate the ways in which humans universally make their mark upon the future by dialogue with the past.

Present for the event will be the three editors of the collection: Ray Cashman, Tom Mould and Pravina Shukla, along with George Jevremovic, owner of Material Culture and contributing writer, and the book’s honoree, Henry Glassie. Ray Cashman is Associate Professor of English and Acting Director of the Center for Folklore Studies at Ohio State University, winner of the Chicago Folklore Prize from the American Folklore Soceity, the Donald Murphy Award from the American Conference for Irish Studies, and author of Storytelling on the Northern Irish Border. Tom Mould is Associate Professor of Anthropology at Elon University, and director of PERCS, the Program for Ethnographic Research and Community Studies. His publications include Choctaw Prophecy: A Legacy of the Future, Still, the Small Voice: Narrative, Personal Revelation, and the Mormon Folk Tradition, and Choctaw Tales. Pravina Shukla is Associate Professor of Folklore and Ethnomusicology at Indiana University, Bloomington, where she recently won the Trustees Teaching Award, and author of The Grace of Four Moons, which won the A.K. Coomaraswamy Book Prize from the South Asian Council of the Association for Asian Studies and the Millia Davenport Publication Award of the Costume Society of America.

Rounding out the visiting guests is Henry Glassie, recently retired College Professor of Folklore at Indiana University. Glassie has received many awards for his work, including the Chicago Folklore Prize, the Haney Prize in the Social Sciences, the Cummings Award of the Vernacular Architecture Forum, the Kniffen and Douglas awards of the Pioneer America Society, the Nigerian Studies Association Book Prize, and formal recognition for his contributions from the ministries of culture of Turkey and Bangladesh. In 2010, he was given the American Folklore Society award for a lifetime of scholarly achievement, and he received the prestigious Charles Homer Haskins Prize of the American Council of Learned Societies in 2011; the award honors a “scholarly career of distinctive importance,” and Glassie is the first folklorist to be so honored. Glassie has lectured throughout the United States and Canada, and in Ireland, Scotland, Wales, England, Norway, Sweden, Finland, Denmark, France, Germany, Malta, Turkey, Israel, Kuwait, India, Bangladesh, China, and Japan. Three of his works have been named among the notable books of the year by The New York Times, and his books include Pattern in the Material Folk Culture of the Eastern United States, Folk Housing in Middle Virginia, All Silver and No Brass, Irish Folk History, Passing the Time in Ballymenone, Irish Folktales, The Spirit of Folk Art, Turkish Traditional Art Today, Art and Life in Bangladesh, Material Culture, The Potter’s Art, Vernacular Architecture, The Stars of Ballymenone, and Prince Twins Seven-Seven: His Art, His Life in Nigeria, His Exile in America.

Commencing at 3 PM, the symposium will consist of short, informal presentations from each of these writers and scholars, of work they have done exploring the ways in which artists engage with tradition. These exciting discussions will include multimedia from experiences and research in the field. Following the symposium, The Individual and Tradition will be available to purchase for the book-signing with the authors. The event will include refreshments and is free and open to the public.