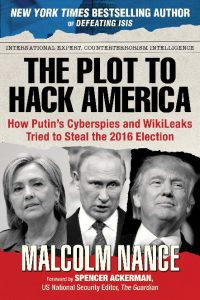 In The Plot to Hack America, published one month before the 2016 presidential election, New York Times bestselling author and MSNBC contributor Malcolm Nance not only identifies the hackers as Russian but digs deep into the biggest political scandal since Watergate.

Malcolm Nance (born 1961, Philadelphia) is an American career cryptologic senior chief petty officer, author, scholar and media commentator on international terrorism, intelligence, insurgency and torture. He is an internationally recognized expert in the history, personalities and organization of al Qaeda and its affiliates including the Islamic State of Iraq and Levant ISIL; jihadi radicalization, Islamic extremism in Middle East, Southwest Asian and African terror groups, as well as counterinsurgency and asymmetric warfare.

In 2007 Nance wrote an article for the counterinsurgency blog Small Wars Journal titled “Waterboarding is Torture… period.” Republished in the Pentagon Early Bird, it set off a firestorm as the first credible description of the torture technique as used in SERE. The article strongly swayed the Pentagon against the use of the waterboard and how its misuse would damage the American honor worldwide. Nance claimed using the torture techniques of America’s former enemies dishonors the memory of US service members that died in captivity through torture and that it does not produce credible intelligence. Nance was called to testify before the U.S. Congress about the use of “enhanced interrogation techniques”. 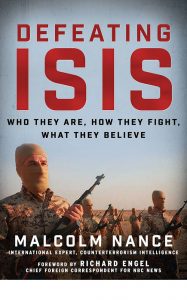 “I keep Malcolm’s book at my bedside table.”
—RACHEL MADDOW, The Rachel Maddow Show, on MSNBC

“In his detailed and informed study Nance argues that, in effect, America’s War on Terror created a new breed of vicious terrorists who wear the mask of Islam like actors in a Kabuki theatre while carrying out horrifically un-Islamic acts.”
—RICHARD ENGEL, Chief Foreign Correspondent, NBC News, from his foreword

“Malcolm Nance lays out a plan to take the war to ISIS while still denying the jihadists the mass battle they crave. Expect him to join the “American crusaders” featured in Dabiq soon!”
—DOUGLAS OLLIVANT, Senior National Security Studies Fellow at the New America Foundation