We are privileged to present a Samuel Anderson Robb Cigar Store Indian at our May 5th auction. Though these hand-carved statues were once frequent sights in front of 19th century cigar stores, original examples are now extremely rare, and highly collectable due to the resurgent popularity of cigars and related memorabilia. Exceptional pieces have been known to sell for over $100,000.

This figure comes to auction from Reese’s Antiques of Philadelphia, who have been its sole owners since the 1940s. Not only is it an important and rare piece of American folk art, but over the seven decades that it stood at the door of Reese’s Antiques, attracting customers, praise, and interested buyers, it has been an emblem of Philadelphia’s Pine Street “antiques row.” It has never before been offered for sale. The statue remains in remarkably good condition for its age, with minimal abrasions and wear. It appears to sport its original paint, with only a portion of the right arm bearing a more recent restoration. This minor addition easily blends in tone with the original paint.

The 19th century original Samuel A Robb Cigar Store Indian up for auction on May 5th.

Samuel A. Robb was born in Brooklyn in 1851 into a family of Scottish shipcarvers and carpenters. Some biographies give the date of 1864 as the start of his work as a professional wood carver, beginning with his five-year apprenticeship as a teenager. He quickly found a place in a workshop, and, at the encouragement of his employer, studied at the National Academy of Design. He subsequently attended and graduated from the Free Night School program at the Cooper Union School of Art. In 1876, at the age of 25, he opened his own workshop, and became well-known for the exceptional quality of his craftsmanship in carving and his extremely high productivity. He enjoyed the position of being New York’s most sought-after woodcarver, producing more than 200 figures a year. In addition to trade figures, circus companies such as Adam Forepaugh and Barnum, Bailey and Hutchison commissioned his work, ultimately leading him to open a second workshop. He closed his shops in 1910, and moved to Philadelphia for a period of nine years before returning to New York. He died in 1928 at the age of 77. 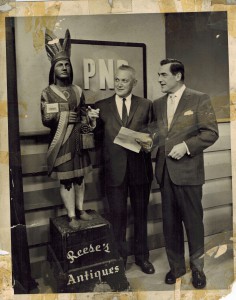 In the 1960’s, PNB–now PNC–rented the Samuel Robb statue from Reese’s Antiques for television commercials.

The cigar store Indian originated as a tradition not in the United States, but in Europe, where carved “Virginie men,” as Native Americans were called by Europeans, were used to advertise the sale of tobacco, an American crop. Tobacconists in America picked up the trend as a means of advertising and making their storefronts distinctive. The folklore about Cigar Store Indians in the late 18th century suggests that they provided a visual marker, much like a barber’s striped pole, for customers who were illiterate, or, in the following century, for the swelling population of immigrants that spoke different languages. Samuel Robb was arguably the most famous carver of these trade figures in the late 19th century. These statues faded from use with the introduction of sidewalk obstruction laws in 1910; stores sold their statues and they gradually disappeared. Speculations that some of these figures might have been used for firewood or other scrap during the Great Depression serve as one explanation for why 19th century cigar store Indians can be found today in such drastically reduced numbers. But by the 1990s, when cigars themselves were gaining widespread popularity, these trade figures experienced a similar comeback, both in the field of replicas and in the surging appreciation—and value—of those original carvings that still exist.