Please Join the Tibetan Buddhist Monks Of Drepung Gomang Monastery, India, for the Construction and Dismantling of a Sacred Tibetan Sand Mandala, followed by a cultural celebration and performance of traditional Tibetan dance, lively debate, chanting, prayer and meditation.

During their stay with us, their lovely sacred crafts will also be offered for sale. The sale of these items and donations for their ceremonies and events go to funding the monastery in India.

Welcoming His Holiness The Dalai Lama And Offering Of Mandala.

According to Tibetan custom, if His Holiness in not physically present, his holy portrait is displayed to symbolize that he is nevertheless the Chief Guest at the function or gatherings. At the same time, one offers all that one values in the Universe by reciting prayers, and visualizing that one is offering these to the guru or lama. 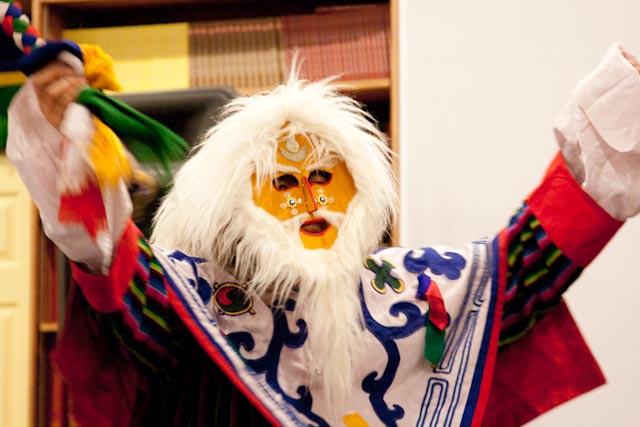 Tashi Shoelpa is the oldest opera company in Tibet. This dance originally appeared in a dream of the Great Fifth Dalai Lama in 1645 and was performed during the enthronement ceremony of Fifth Dalai Lama. The performer wearing the white-beard mask represents Saint Thantong Gyalpo, the founder of Lhamo/Tibetan opera, who reputedly lived for 140 years and also symbolizes long life and good health. Lhamo/opera conveys the teachings of Lord Buddha through historical reenactment. The purpose of this very dance is to bring good luck and good omens specially to inaugurate special occasions such as construction or opening of a monastery or big official gatherings.

This is translated as ‘Praise of the great Maitreya’ (the future Buddha) but is in fact verse of Praise composed by the 19th Abbot of Drepung Gomang monastery, Tsondue Gyatso, in honor of 18th Abbot, Jampa Lhundup. After hearing the amazing teachings of Jampa Lhundup, Tsondue Gyatso saw him as an embodiment of Maitreya Buddha, and was inspired to compose these verses. This is a very important regular chants of the monks of Drepung Gomang Monastery for the peace and harmony of the world. They will chant in their unique and special chanting style.

Ignorance is the root cause of suffering, and wisdom is the antidote to ignorance. Through learning, one eventually becomes established in wisdom. Just as a lamp illumines a house so that one can see colors and shapes, so learning and wisdom enable one to see the nature of phenomena.

The practice of debate is the most important way to learn Buddhist Philosophy in the monasteries. The main purpose of monastic debates is to defeat misconceptions in order to establish a correct view and to clear away any objections to that view. An actual session of debate involves two parties, a defender who sits and give answers to the challengers who stands up and asks question. There is a whole separate vocabulary for debate, each word with a complex meaning that is difficult to translate, but here are a few words you can listen for:

Kor-sum: You are wrong!
Cher…cher… cher…! Hurry up and answer!
Oh… tsa! You have contradicted yourself!
Dhi……! This is a syllable associated with Jamphelyang (Manjushri) the god of wisdom. By calling this syllable, the questioner calls upon the deity to assist him.
Chee-Cher! What is your reasons?
Dho! Yes, I agree!
Dhag-ma-Thub: I disagree with your reason.

Each movement of the debate is also highly symbolic. In brief, the upraised arm represents Manjushri’s sword of knowledge, cutting through ignorance. The left hand represents wisdom-the actual antidote to cyclic existence. The right hand represents method-the altruistic intention to become enlightened, motivated by great love and compassion for all sentient beings. The clap represents a union of method and wisdom. In dependence on the union of method and wisdom, one is able to attain Buddhood. 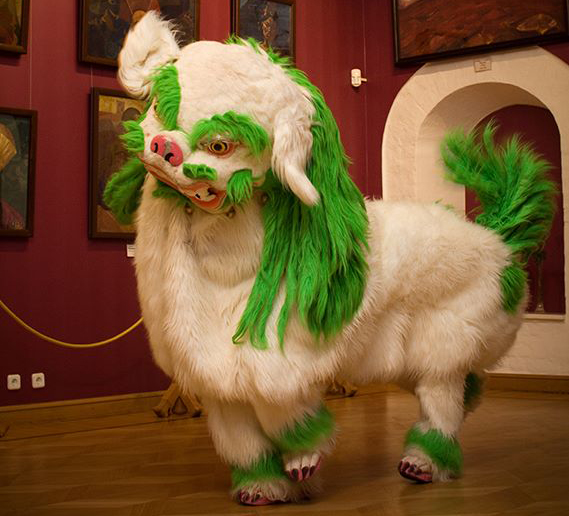 The snow lion is the mythological animal that represents Tibet, the ‘Snowy country.’ In Tibet the snow lion symbolized the fearless and elegant quality of the enlightened mind. It has a beauty and dignity resulting from a body and mind that are synchronized. The snow lion has a youthful, vibrant energy of goodness and a natural sense of delight. It’s image can be found in Tibetan National Flag as well as on the throne of a Buddha to represent 8 main Bodhisattva-disciples of
Buddha Shakyamuni. The Snow Lion, king of all beasts symbolizes absolute freedom. Roaming free, with eyes turned towards heaven, he embodies unconditional cheerfulness, goodness and a natural sense of delight. These are attributes of awakened mind – totality clear, joyful and confident. 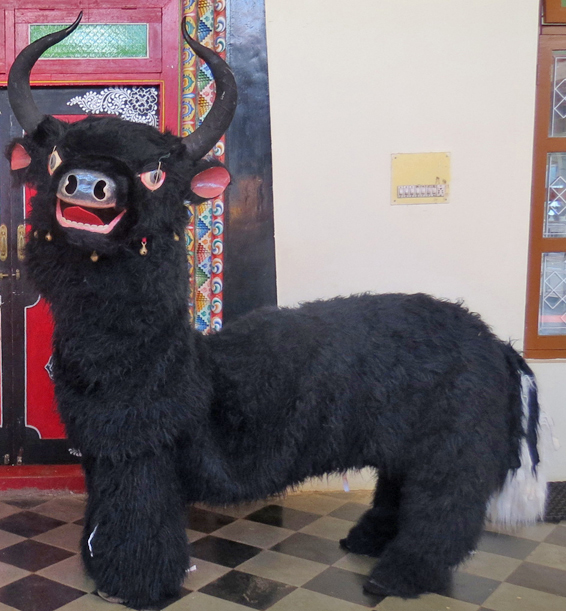 Yak cham
Tibetan yaks are native to the Himalayan Mountains of Nepal, India and Tibet. They were domesticated in Tibet nearly 5,000 years ago. They can survive in rocky, alpine terrain with meadows for grazing. They are highly adaptable to a variety of habitats.

They are intelligent and fairly easy to train. These yaks are capable of climbing to altitudes of 20, 000 feet. A yak can carry a 220-pound load up terrain too rugged for horses.

Yaks are an important source of meat, milk, fiber, hide, butter, transportation and dung for fuel. Yaks are also important in Tibetan mythology as messengers of the gods living in high places.

The unique animal is the symbolic of the Tibetan spirit of rugged strength and playfulness. Here in this dance, its shows the peaceful co-existence of human being with the animal kingdom.

It literally means ‘to cut off’ refers to a practice that is designed to cut off all ego involvement and
defilement. This was introduced by Guru Padma sambava, the great Indian scholar who visited Tibet five times, on his third visit, he gave this chÖd teachings in Tsang Region first to Sonam Lama and Marla Tsenbo, Sonam Lama transmitted the teachings to a woman disciple Machig Labdron (1055-1153), so this chod teachings were spread by this great woman teacher. It is a prayer for loving kindness, compassion and the minds of enlightenment and the wisdom of emptiness.

This chanting is used when one meditates on selflessness and removes self-cherishing and ego clinging by visualizing the sacrifice of one’s body for the benefit of others. Ultimately the purpose of this chant and practice is to realize ‘emptiness’, which is not ‘nothingness’, but rather theemptiness of many of our assumptions about our separateness, leading to a deep state of non- duality in which everything is experienced as totally connected.

PRAISE OF THE SIX ARM DHARMA PROTECTOR MAHAKALA
A special prayer, paying homage to six armed Mahakala (Gonpo), the great black one. Though fierce in his trampling upon the evil spirits of delusion and greed, he is actually considered to be the agent of Avalokiteshvara or Chenrezig, the angelic Bodhisattva of great compassion. Mahakala is frightening in appearance because his responsibility is to protect all beings from evil. These verse was composed by a great Indian yogi Drubchen Shawari who had a vision of Mahakala while meditating, and was inspired to compose these verses of praise during a vision of Mahakala that appeared to him gradually from the feet upwards. This prayer request Mahakala to protect the Dharma and to remove all obstacles of all sentient beings.

DEN TSIG MONLAM PRAYER (PRAYER OF TRUTH)(*tsemeyonten)
Honoring and Invoking the Great Compassion of the Three Jewels; the Buddha, the Teachings, and the Spiritual Community

This prayer, Words of Truth, was composed by His Holiness Tenzin Gyatso, the Fourteenth Dalai Lama of Tibet, on 29 September 1960 at his temporary headquarters in Dharamsala, India.

This prayer for restoring peace, the Buddhist teachings, and the culture and self-determination of the Tibetan people in their homeland and the goal of universal compassion was written after repeated requests by Tibetan government officials along with the unanimous consensus of the monastic and lay communities. It is also an invocation of compassion towards all suffering sentient beings: oppressor and oppressed alike.

A short prayer for the well being, good health and happiness of the audience. May this prayerbrings you all good health, prosperity, long life and peace in this world.

When Nagarjuna brought this text back to the human realm from Naga Land , he realized that the volume of the material was so great that people would not be able to absorb all of it because they had short lives, little merit, and very little time to study. So he composed his famous commentaries which are more concise and were based upon the Prajnaparamita. Perhaps the most famous of these is the Mulamadhyamakakarika, “Root Verses on the Middle Way Philosophy”, which is one of six major commentaries written by Nagarjuna, each of which was famous for its concise presentation of the view of the Madyamika or “Middle Way” philosophy that emptiness is the true nature of reality.

A special prayer, paying homage to Je Tsong Khapa. The founder of Yellow sect (Gelug Sect) of Tibetan Buddhism. Je Tsong Khapa is seen as an emanation of Avalokiteshvara, Manjushri and Vajrapani. Monks will chant a verses from Lama Tsong Khapa Guru Yoga.

Translated version: “Je Tsong Khapa, crown jewel of the holy masters of the Land of Snows, you are Avalokiteshvara, great treasurer of inconceivable compassion untainted by ego’s delusion. You are Manjushri, powerful master with stainless wisdom. You are Vajrapani, destroyer of forces of demons. At your feet, famed Lobsang Drakpa, I humbly bow and earnestly request that all sentient beings achieve enlightenment”.
During their stay with us, their lovely sacred crafts will also be offered for sale. The sale of these items and donations for their ceremonies and events go to funding the monastery in India.