Material Culture’s October 14 sale, “The Spirits of My Reincarnation Brothers and Sisters: Art, Textiles, Antiquities, Carpets, Ethnographic Arts, Old Navajo Jewelry” will showcase the second part of Bill Liske’s collection of antique Chinese and Tibetan textiles and artifacts, the fruit of three decades of Liske’s travel and work in the Himalayan region. Originally a mountaineer and guide, Liske’s natural eye for textiles was honed by textile dealers in the area, and his expertly-chosen collection has appeared at many galleries, the History Museum in Denver, and in Hali magazine. One of the most exceptional of these items to be shown at this auction is a vibrant and powerful early Thangka scroll painting depicting the deific reincarnation known as Vajra Varahi in Sanskrit and Dorje Pakmo in Tibetan, dating to 14th-16th century Tibet. Four excellent masks are led by a 19th century Tibtetan or Bhutanese bull-headed Buddhist dance mask of meditational deity Yamantaka, whose extremely vibrant red tone is achieved by pigment on a papier-mâché of laurel or mulberry. Other top lots from Liske’s collection include an 18th century Tibetan Thangka, a Chang Tang tie-dyed woman’s dress, a 19th century Tibetan silver-lined ivory drinking cup and lid, and a 12th century red field silk panel with coiled dragon roundels.

The Michaelian Meshed Carpet, custom woven for the Union League Club in New York City, leads its category; at 32 feet by 47 feet, this colossal carpet from circa 1904 might be one of the largest antique Persian carpets woven in one piece, still in its original size and usable condition. Estimated to be worth between $60,000 and $90,000, the human time spent in creating this carpet, from spinning the yarn to weaving the carpet, probably exceeded 10,000 days. 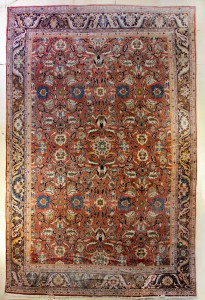 Other highlights include a large decorative Sultanabad carpet (lot 252, prov: F.J. Hakimian), and a stunning apricot field 19th century Serapi carpet from a Philadelphia estate (lot 251), both valued at $4,000-$6,000. Other lots among a rich field of Persian, Caucasian, Anatolian, Moroccan, Chinese, Mongolian, Tibetan and Navajo rugs, include an early west Persian Kurd rug in original estate condition (lot 254), as well as several central and west Anatolian rugs from the collection of Samy and Sara Rabinovic, including an 18th c “Kiz Bergama” rug. A rare, very large Gafsa Oasis Kilim (lot 298, 6’4″ x 21’10”) in excellent condition and color is estimated at $1,500-$2,500.

Outstanding textiles include a large 18th century Thar Valley silk (lot 109) on linen panel valued at $1,500-$2,000, a Chinese 18th century silk brocade (lot 99, $1,500-$2,000) and a rare 6th-9th century pre Columbian funerary head band made with a knotted pile technique, valued at $1,000-$1,500. A truly exceptional 19th century Syrian silk and gold Judge’s Tunic from the collection of Samy and Sara Rabinovic, Philadelphia, was the blue ribbon exhibition winner at the 1996 International Conference on Oriental Carpets, and is expected to fetch $3,000-$4,000.