In its auction “Art 360: Fine, Folk and Self-Taught Art,” Material Culture brings together a rich assortment of art across these artistic categories. The sale’s over 400 lots encompass painting, drawing and sculpture in fine, folk and self-taught art, as well as prints, etchings, and photography. This approach echoes the auction house’s mission to value art above the boundaries of genre, and enables the offering of more frequent sales to the public in which all types of art are welcomed.

The vibrant and diverse pieces in the sale will be on view in Material Culture’s dedicated gallery space March 6 through March 8, from 10 AM to 6 PM. Admittance is free and open to the public.

The auction opens with the work of significant self-taught artists, both American and international. Two pieces by Cuban-American self-taught artist Felipe Jesus Consalvos (1891-1960) start the day. Working in the tradition of Cuban cigar-band collage, Consalvos’ mixed media pieces in the sale, led by “Incarnate Human God” (lot 1), balance playful absurdism with political and social satire. Self-taught artist Purvis Young (1943-2010) from the Overtown neighborhood of Miami, Florida, follows with twelve lots of painting on found wood and paper. Of particular note are two untitled paintings of cityscapes, one incorporating fruit (lot 6) into its panorama, and one, figures (lot 8). Among Philadelphian artist Jim Bloom’s (b. 1968) seven pieces up for auction is a mixed media assemblage titled “The Undesirables” (lot 36). The words of the title are crowded to the top of the paper by a throng of faces and figures. A pair of drawings by Polish artist Nikifor Krynicki (1895-1968) both depict religious scenes; perhaps most compelling is one that places a praying Jesus between two saints in an interior church-like space (lot 61).

Self-taught sculpture includes two carved and painted wooden figures by Howard Ivester (American, 20th century). Both portray women, topless but with hands casually in their pockets, in a pair of jeans (lot 32) or a red hat (lot 33). Another piece of figural sculpture is a ceramic folk art representation of Frida Kahlo (lot 100) from Mexico. This painted terra cotta Frida is shown with smaller figures—some also identifiable as Frida—attached to the landscape of her skirt, and is signed Josefina Aguilar.

Over 150 lots of fine art come to the auction from the estate of Aaron M. Fine of Swarthmore, Pennsylvania, of the law firm Fine, Kaplan and Black, and a passionate collector and supporter of the arts. His collection brings to auction eight pieces by Andrew Turner (1944-2001), a prominent Philadelphian artist whose impressionistic brushwork is evocative of jazz. Among Turner’s paintings, an untitled bar scene of oil on wood (lot 117) may step forward as the most significant. From the same period, Emma Sergeant’s portrait of Imran Khan (lot 156) is another notable painting from Fine’s collection. British artist Sergeant (b. 1959) shows the cricketer and politician seated in front of a spiral staircase; the perspectives in the painting tilt in a post-Impressionist manner in response to the large size of the board, over three feet tall. A large painting by American abstract expressionist John Philip Hultberg (1922-2005), entitled “Winged Platform” (lot 139), seems a gathering of dynamic vistas.

Another highlight of Fine’s collection are paintings by Icelandic-American artist Louisa Matthiasdottir (1917-2000), particularly the brightly-colored “Landscape” (lot 126) with livestock and a dog flanking the pink figure of a girl. Two early works by Richard Estes (American, b. 1932) capture in their perfect observation the artist on the way to creating the photorealist works that would make him famous (lots 128-129). The areas of color that create the man reading or the men at work is more expressionist than Estes’ hyper-realistic work that would follow, but a meticulous eye is the constant. In a provoking self-portrait by Francesco Clemente (Italian, b. 1952), created with colored woodblock printing, the artist gazes out drily from the bottom of the page. The print can be found in a catalogue from the Metropolitan Museum of Art.

The Fine collection also showcases twelve lots by American artist Dozier Bell (b. 1957) which exemplify her contemporary continuation of Romanticism’s awe, beauty and fear. “Conflict Series #69” (lot 143), a mixed media piece showing a stretch of night sky, is made more noteworthy by the personal inscription from the artist, “To Aaron on His 80th” on the back of the canvas.  Czechoslovakian artist Pravoslav Sovak (1926-2000) is represented in five etchings and prints, led by an untitled portrait of woman (lot 272), layered in the upper left with a floor-plan and lettering.  The sale features several sculptures by Jorge Rodriguez-Aguilar, a Colombian artist born in 1960. Some are made of metal painted with polychrome, while “Pajaro Macua”—meaning ‘Macaw Bird’—achieves an aerial lift in carved, solid wood (lot 132).

Also in Fine’s collection is a large painting by Pennsylvania folk artist Amos Shontz, who specializes in naïve-style representations of animals that bear a resemblance in structure and landscape to the similar paintings of the 18th century. In “Aspetando Per Leda” (Waiting for Leda) a pig reclines in a pond, balanced compositionally by a pink-white lily (lot 125). Three dye transferred photographs by Rosamond Wolf Purcell (American, b. 1942) include the brooding, surreal “Boy with Violin” (lot 164). An untitled drawing by American artist Louisa Chase (b. 1951) plays with abstract shapes and gesture reminiscent of clouds and rainfall (lot 135). Other pieces include David Fertig’s (American, b. 1950) oil on paper painting, “Girl Sleeping” (lot 158), a lithograph entitled “Isle au Haut” (lot 271) by Fairfield Porter (American, 1907-1975), and five lots by Mary Dewitt (American, 20th century) including an untitled porch scene (lot 220).

Leading fine art from other sources is a painting by Francis Speight (1896-1989), a native of North Carolina who spent most of his life in Doylestown, Pennsylvania. The painting, “Schuylkill Valley Riverscape,” (lot 344) dates to 1935; vehicles of the period are seen in silhouette against the river, mirroring the darkening sky. French painter Frederic Montenard (1849-1926) is shown at auction in a landscape (lot 311) containing a herder and his flock, trooping across arid terrain. Dated 1901, this work of oil on canvas is still displayed in a period frame. James Montgomery Flagg (1877-1960), famous for his “I Want You” Uncle Sam recruitment poster, is shown at auction in an illustration depicting a man tiptoeing along a fence, with text at the bottom which reads, “Private Night Life of a Park Ave Psychiatrist / Dick Hoffman Sings – / I Wonder Why I’m on the Tiles when Pussy Sleeps in a Bed of Smiles” (lot 345). A stained glass piece by Philadelphian artist Judith Schaechter (b. 1961), depicts a woman, tied up and bloodied as if beaten, surrounded by cakes and treats. Entitled “Sweets Kissed to Death,” (lot 383), the stained glass is displayed with a light box in a frame of dovetailed oak.

Some of the most exceptional folk art in the sale is an array of 19th century Russian Orthodox icons, starting with Lot 392. A stunning version of a ‘Burning Bush’ icon, the work of hand-painted egg tempera and gesso on wood depicts the Virgin Mary as a ‘God Bearer,’ seen as a parallel to the event in the Book of Exodus. Another folk art highlight is an outstanding Haitian sequined Vodou flag (lot 69), or ‘Drapeau,’ by Antoine Oleyant (1955-1992). Oleyant, considered to be the father of artistic Vodou flags, is Haiti’s most celebrated artist of the genre. 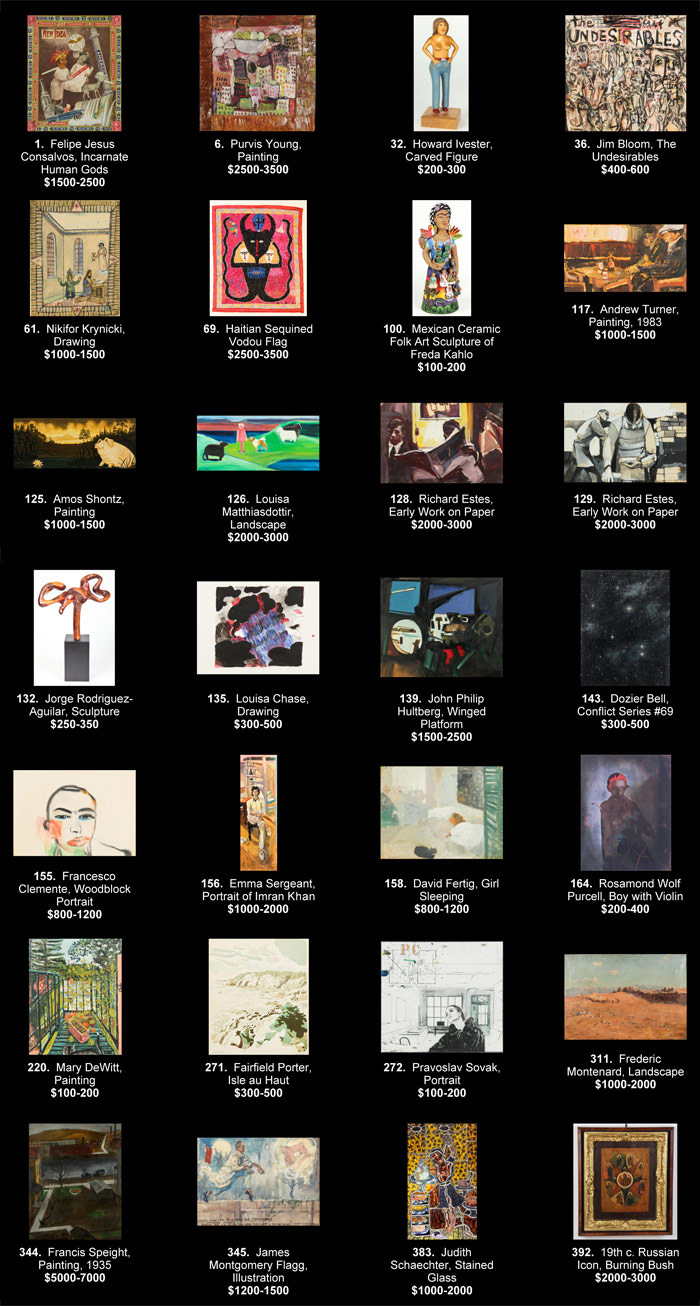