Our May 5 auction, “New World Orders: Art, Furnishings, Collectables, Decorative Arts,” features nearly 100 lots of Asian art, from the 12th century to today, but we are particularly pleased to be showcasing a number of works from contemporary Chinese painters. Over the past decade, the value of contemporary Chinese art has steadily increased, setting record sales for auction houses everywhere. Sotheby’s, which has held auctions dedicated solely to contemporary Asian art since 2004, credits Chinese art, in particular, for driving the entire discipline to be “one of the most dynamic sectors in the international art market with demand steadily growing.” 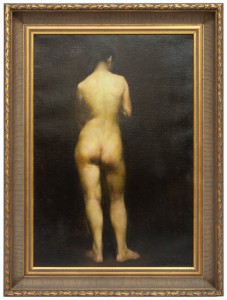 This field will be led at our auction by a painting by Gou Runwen, “Standing Nude with Back View.” Born in 1955 in the Zhejiang Province, Runwen originally studied art for the theatre, graduating with a Bachelor’s degree from the Department of Stage Art of Shanghai Drama Institute in 1982. Not two years later his work was shown in an exhibition of young artists, and he returned to school, graduating in 1988 from the Oil Painting Department of the Central Academy of Art. Runwen is now a professor of oil painting at the Guangzhou Academy of Fine Arts, and serves on many art committees, art associations, and as the vice chairman of Guangdong Artist Association. His work has received nearly a dozen awards from art museums and art expos in China, and has been shown in seven exhibitions at the China National Museum of Fine Arts, as well as numerous other museums in China. Internationally, his pieces have been shown in Italy and the United States, and remain in the permanent collections of the Mentova Museum, the Shanghai Art Museum, the China Historical Museum and the Guan Zhou Art Museum.

A realist painter, Runwen presents his subjects–most usually, female figures, clothed or nude–with a flawless, compassionate clarity. Realist oil painting is an important movement in contemporary Chinese art. A 2007 exhibition in China called “China Realism”–featuring works from Runwen, amongst others–called realism “the most direct and powerful way of communication between art and populace,” noting that it has “a mainstream position in Chinese oil-painting.” “Standing Nude with Back View” is an excellent example of Runwen’s work; the luminous but realistic human form leaps from the dark background. This work of oil on canvas measures 31.5″ by 21.5″ and bears the artist’s signature and is dated March 1988, both in Chinese, in the lower right. We acquired it from a Delaware collection, and it was previously purchased directly from the artist in 1988 in his studio at the Guangzhou Academy of Fine Arts. It is expected to sell for $30,000 – $40,000.

There are many important movements in contemporary Chinese painting, however, and we are proud to be representing several of them in our inaugural auction. Some artists continue to explore traditional Chinese painting, known sometimes as ‘native’ or ‘national’ painting. One of the most accomplished of these artists is Fan Zeng, born in 1938, using the traditional method of ink or color brushwork, typically on paper or silk, in contrast to oils on canvas. This style bears much in common with calligraphy, and Zeng paints with simple, vigorous strokes, evoking a figure, landscape or animal in a few vivid lines. Zeng is in fact also a calligrapher, poet and writer, and often incorporates the written word into his paintings.

Zeng’s love of traditional Chinese art stems in part from his own family history, which counts thirteen generations of artists devoted to painting, calligraphy, poetry and prose, dating all the way back to the Song Dynasty. As a child, practicing calligraphy was part of his daily homework, and became a member of the Nantong Artists Association at the age of 13. Zeng originally majored in history at Nankai University, before transferring to the Central Academy of Fine Arts in Beijing to study art history. He worked at the National Museum of Chinese History; he has also spent many years as a professor at Nankai University, serving as Dean of the Oriental Art Department, and in 1999 he was made a Distinguished Professor. He also dedicates time to advisory positions to the China Art Institute, the College of Chinese Studies in China, Renmin University, and the Academy of Chinese Culture in Beijing. Exhibitions of his work have been held in China, Hong Kong, Japan and Europe; he is so popular in Japan that an art gallery devoted exclusively to his work was opened there in 1983—a remarkable sign of esteem, since the only other foreign artist to have a dedicated art gallery in Japan is Pablo Picasso.

The piece by Fan Zeng that will be shown at our May 5 auction is entitled “Zhong Kui Shen Wei,” meaning “Formidable Zhong Kui.” Made in the ‘national’ style of centuries of Chinese painting, this work of ink and color on paper is made in hanging scroll format. It depicts Zhong Kui, a quintessential figure of Chinese mythology, famed for his ability to conquer ghosts and evil spirits, and his command of 80,000 demons. Images of Zhong Kui frequently hang at household gates as a guardian spirit, or in businesses with high-value goods. Zeng’s painting is inscribed “Zhong Kui Shen Wei Sui zai dingchou Jiangdong Fan Zeng”—first the title, then the date, the beginning of dingchou year (1997), and then the artist’s signature, “Fan Zeng.” The two seals are “Da ji yang” and a seal of the artist, “Fan Zeng.” The piece measures 53’’ by 26’’ or 134.6 by 66 cm. It comes to us from an Estate sale in New Jersey, where it was possibly acquired by the estate directly from the artist, and carries an estimate of $6,000-$8,000.

The figure exemplified in this painting is arguably what has made Fan Zeng most famous. During China’s ten-year Cultural Revolution, Zeng’s artistic production suffered, but it revived in 1977 with a painting of Zhong Kui in the “splashed ink” style. The creation of this image was broadcasted live on TV as part of the spring festival at the Great Hall of the People—Zeng had been invited to draw this famous protector as a guardian spirit—and both the figure of Zhong Kui and Zeng’s artistic panache were the subject of much acclaim. Zhong Kui subsequently became an important symbol of Zeng’s artistic spirit, and the “splashed ink” style is thought of as his specialty. This tradition dates back to the great painters of the Song Dynasty, who, unlike the Ming and Qing Dynasties before them, favored simple, bold brushwork in the creation of dynamic form. Artists “splash” the ink washes to define broader elements, and then add finer details with swift, highly calligraphic strokes. This means that an artist like Fan Zeng has to have a clear idea, before he begins, not just of the image, but specifically how each brushstroke will summon it from the paper.