We are very pleased that our inaugural auction,”New World Orders,” will be continuing our relationship with Prince Twins Seven-Seven, who spent time at Material Culture as Artist-in-Residence; we hope, additionally, to honor his recent passing, in June of 2011. Born in 1944, Prince was an original member of the acclaimed Osogbo School, named for the Yoruba town Osogbo, in southwestern Nigeria. The Osogbo School had its roots in the Mbari Mbayo Club created by Ulli and Georgina Beier to foster young artists; Prince benefited from the encouragement, but his style, from the first day he put pen to paper, was his own. Intricate in both style and cosmology, his works are detailed at every layer, portraying spirits with double eyes, plants teeming with patterns, animals whose decoration are revealed to be smaller animals, all evocations of the forces, the impulses and narratives of his complex worlds. The universes of gods and men that Prince depicts, and many of the elements of his own personal mythology, are drawn from the artist’s profound connection to traditional Yoruba beliefs; throughout his life, Prince was also a dancer and a musician, putting him forward as a spokesman for Yoruba culture in many art forms.

Prince was undoubtedly one of Africa’s most famous contemporary artists, and his fame has garnered him dozens of exhibitions around the world, in countries including Germany, Nigeria, England, Spain, France, Italy, Holland, Finland, Czechoslovakia, Ghana, Canada, Mexico, Cuba, Argentina, Japan, Australia and the United States. His work is in major museums around the world, including the Smithsonian Institution, the Indianapolis Museum of Art, and the Philadelphia Museum of Art. In 2005, he was designated UNESCO Artist for Peace. 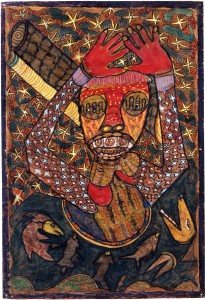 Prince and his work were also the subject of a major book, “Prince Twins Seven-Seven: His Art, His Life in Nigeria, His Exile in America,” written by Henry Glassie and published in 2009. Two of the five items in our May 5 auction feature in that monograph, “The Dream of the Abiku Child” and “Priest and Village Dancers.” “The Dream of the Abiku Child,” created in 1967, employs ink, watercolor, and oil on brown wrapping paper, which was glued to plywood, framed, and glazed. Valued at $4,000-$6,000, this important work is a fusion of his personal vision and the Yoruba belief that children who die shortly after birth are reborn in the same family, with the same spirit sent from the other world: the abiku. In his family, Prince was the only survivor of seven sets of twins—hence the name he gave himself, though born as Taiwo Olaniyi Oyewale—and consequently he himself was the abiku child, freed from the cycle of reincarnation, but carrying more of the spirit world with him in life. According to Prince, he was spared because his mother prayed to the goddess Oshun, who is often symbolized in Prince’s paintings by fish, such as those that dance at the bottom of the frame.

“Priest and Village Dancers,” a work from 1969, is made of two layers of wood, brought to life in oil, watercolor and ink. Prince called these creations of two or more layers of wood  “sculpture’s painting,” highlighting the equal importance of the relief of multiple layers, the painted figures, and the rhythmic patterns that typically cover every surface. “Priest and Village Dancers” shows the priest at center, surrounded by various musicians, limber dancers, and a population that stretches far into the background; it is expected to fetch $4,000 – $6,000 at auction. “The King of the Forest” (1980) is another “sculpture’s painting” of ink, watercolor and oil on two layers of wood, depicting several human figures and a large bird—birds typically symbolize spirits in the worlds of Prince’s paintings—against the intricate backdrop of a forest. It is valued at $3,000-$5,000. We will also be presenting another painting on brown wrapping paper glued to plywood, glazed, and framed, likely dating to the 1960s, valued at $2,000-$3,000, and an earthenware pot, painted by Prince, expected to sell for $300-$400.