The Bill Liske Collection of Antique Tibetan Textiles, Carpets and Artifacts is the culmination of Liske’s three decades of travel and work in the Himalayas. A lifelong mountaineer, Liske originally visited Nepal in 1974 for the climbing opportunities of its terrain, and was drawn in by the society and its culture. On this trip, he met a gentleman named Jigme Choden, whom Liske describes as his “Tibetan Textile Guru.” With the formation of this friendship, the seed for this spectacular collection was planted.

Liske continued to travel to the region, and in the early 1980s he began working as a guide; his expertise in Nepal, Ladakh, Tibet, Sikkim and Bhutan make him one of the most knowledgeable western guides for the area. During this time, he also developed a relationship with many textile dealers and pickers, some of whom would even save fine works for him that they found exciting. Liske continued to learn about the world of these woven artworks from Jigme, other Tibetan textile dealers, and knowledgeable dealers with whom he made connections in the United States. However, he has proved over the years to have an uncanny, almost preternatural ability to distinguish the excellent and the rare from the merely decorative and good. His natural eye for textiles is the hallmark of this exceptional collection.

In 1998, he curated an exhibition of his work entitled ‘From the Heart of a Continent: Carpets and Textiles of the Tibetan Realm,’ in his home state of Colorado, at the History Museum in Denver. Pieces from his collection have also been shown at the Krimsa Gallery in San Francisco, the Shaver-Ramsey Gallery in Denver, and in Hali magazine. His collection has continued to grow, and approximately 100 works will be featured in the May 25th auction.

Highlights of the Liske’s textile collection to be auctioned include a truly outstanding Yuan silk embroidered thangka in excellent condition, an embroidered mandala, a Tashi Taki embroidery and a Lantsa mantra silk also from the Yuan dynasty (1271-1368), and fine textile fragments, one red with gold dragon roundels and one white with gold phoenix shields, that date to either the Jin (1115-1234) or Liao (916–1125) dynasties. Approximately a dozen pieces, in silk, velvet, and brocade, date to the Ming dynasty (1368-1644).

A rich assortment of carpets, accounting for over half of the auction pieces, are chiefly comprised of Tibetan rugs dating to the 19th century, though a few may be older, and several may be early-20th-century creations. An exceptional Tiger khaden was showcased in Hali San Francisco tribal and textile arts review section, while a General Ma Carpet, an archaic red field khaden featuring the ubiquitous Tibetan ‘frog foot’ motif and a flat weave border, an extremely rare cut-loop embroidered makden saddle bottom with the ‘frog foot’ motif, and a monastic meditation mat of bright and glorious red, yellow, blue-green, clear green and indigo, woven in the ‘warp-faced back’ technique, are among the auction items that have been featured in Hali magazine. 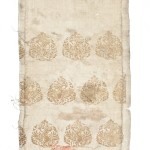 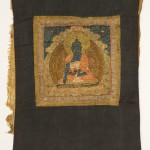 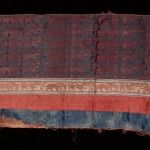 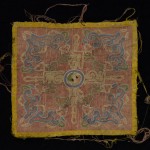 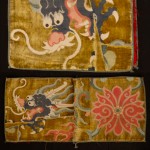 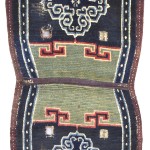 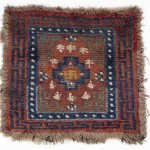 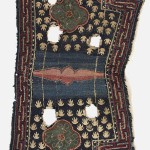 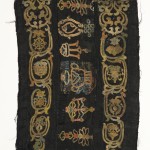