650+ lots from regional and national estates; featuring items from the Kristina Barbara Johnson Estate, Princeton, New Jersey, including a rare copy of George Washington’s Address On His Declining A Re-election To The Presidency, A. Stoddard, circa 1797 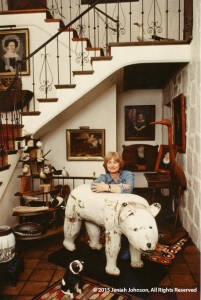 Material Culture will present an Estates Auction on Sunday, November 29th, headlined by items from the Kristina Barbara Johnson collection. Johnson’s extensive and diverse collection, which has also been featured in previous Material Culture auctions, is also representative of the sale as a whole, which includes finds to excite collectors in many genres. Over 650 lots span a wide range of categories, time periods and countries of origin, with a full complement of collectibles and fine, folk and ethnographic arts.

A strong showing of antique Asian arts encompasses Chinese jade, amber, porcelain, bronze, lacquerware and textiles, Japanese prints and paintings. Oriental rugs, including Persian, Turkish, Caucasian and Indian carpets will be on offer, as will selections in Haitian and Mexican art and masks and pre-Columbian pottery and artifacts. American antiques include hooked rugs and textiles, with American as well as Continental glass and ceramics. For decorators, antique and mid-century modern furnishings, including some Arts and Crafts furniture and accessories, will draw attention, along with garden and statuary pieces. Interested collectors will also find surprises in fashion photography, books, jewelry, and antique silver–and in perfect time for anyone seeking truly unique, original or specialized holiday gifts. 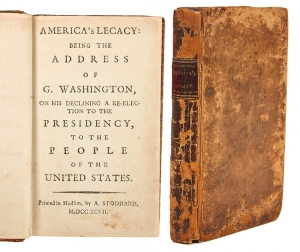 Lot 21. A Rare Leather Bound Volume of George Washington’s Address On His Declining A Re-election To The Presidency, A. Stoddard, circa 1797. Washington’s “Farewell Address” is one of the classic statements of republican principles for the new nation. It also burnished the image of American Cincinnatus that had been bestowed on Washington after his first retirement in 1783. Although the Address was widely published in newspapers and as a long pamphlet, original copies are scarce, and are exceedingly hard to find in original bindings.

Kristina Barbara Johnson was named one of America’s Top 100 Collectors in Art and Antiques from 1986 to 1996, and it is a testament the depth of her passion for collecting and the breadth of her interests that noteworthy and attractive pieces continue to come to market. The rarest piece at auction from her collection is arguably an unusual leather-bound copy of George Washington’s address “On His Declining A Re-election To The Presidency,” printed by A. Stoddard, circa 1797. A granite portrait bust of George Washington also comes to the sale, exact age unknown, but according to the estate, found in Roscoe, New York in the early 20th century. Two antique fairground finds consist of a pair of 19th century carousel benches, bookended with animal armrests, and a pair of midway ride fascia boards, each in the shape of an octopus with moving pendulous eyelids. Both sets bear their original paint decoration. Also of carved and painted timber, a confidence decoy of a tundra swan, neck looped to preen its back feathers, dates to the early 20th century. 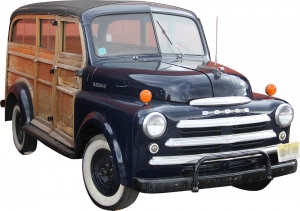 One of the leading lots from the Johnson collection is a 1949 Dodge B-2-B Van Woodie, with a Cantrell body. This vintage automobile is in running condition, with a mileage of 50,000 listed on the title. A pair of massive recovered natural whale jawbones, an artifact from the time that Johnson had the largest private whaling collection in the world, were used as a garden entranceway on her estate. A panoramic scroll from 19th century Ireland, 25 feet in length, depicts the rolling Irish countryside along with cityscapes of Galway and Dublin. An antique hooked rug, though Asian-inspired in design, is of classic American construction, with four red dragons circling a medallion of the same color on a black field. 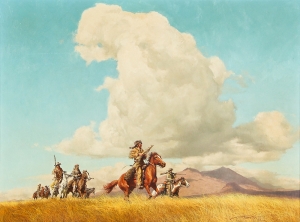 Leading fine art at the auction is an oil painting on board by Frank McCarthy (American, 1924-2002), titled “On the way to the Alamo, Davy Crockett and a few friends”. Dated 1970, the painting tugs the figures on horseback forward beneath a towering cloud in an expanse of blue sky, and is an excellent example of the depictions of the American West that made McCarthy famous. Another American panorama of the earlier part of the 20th century, “High Sierras,” is an oil on board attributed to Edgar Payne (American, 1883-1947), with distant sun-tinged mountains seen through a high-altitude gap of trees and rock. A decidedly different kind of Americana is an original acrylic painting by pop art master Peter Max (German-American, b. 1937), “American Flag,” dated 2008. The two most notable 19th century oil paintings are Eugene Petit’s (French, 1839-1886) “Still Life with Flowers,” and “Judith at the tent of Holofernes,” by genre painter Alfred W. Elmore (British, 1815-1881), dating to circa 1871. 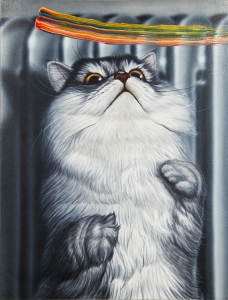 Several contemporary and 20th century artists with connections to the Philadelphia area are shown to advantage in the sale. Charles Searles (1937-2004), who primarily worked in brightly-painted wood sculptures, abstract but rhythmic and structured, has a representative untitled piece from 1988. The three-dimensional sculpture works within its two-dimensional wall-mountable frame, which bears a label from the Sande Webster Gallery on the reverse. Three acrylic paintings on canvas come from Bruce Evans (b. 1950), a painter who blends hyperrealism and surrealism, with nods to modernist abstraction. He is well known for his animal portraits, as with his “Feline Curiosity,” of 1983, in which the black-and-white photorealist cat is transfixed by what appears to be a swipe of rainbow paint across the surface of its own painting. “Odds and Ends” (1979) also layers Pollock-style spatter on top of an assemblage of images, painted with its own shadow so it appears to hover above the level of the faux-collage. Antonio Martino (1902-1989) is shown in two fine seascapes in oil, one on canvas and one on board; an oil on canvas still life by the wife of his brother Giovanni, Eva Marinelli Martino (b. 1929) also appears in the auction. 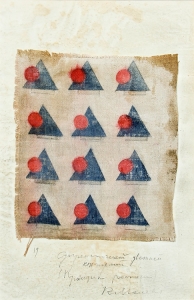 The auction’s modern and contemporary art also has an international scope. An oil painting on canvas, “Pink Pig with Ladybugs,” by Swiss visionary artist Erich Staub (b. 1942), is characteristic of his blend of folk quality and the surreal. Cuban artist Kcho, born Alexis Leiva Machado in 1970, has gained international fame for his large sculptures and installation pieces, and his two crayon drawings on paper at auction, “Instalacion” (2002), and “Archipielago” (2001) bear the same architectural imagination. A framed and matted textile, titled “First Supremacist Fabric Design,” is attributed to Kazimir Malevich (Russian, 1879-1935). Other paintings include an abstract canvas by Yannis Maltezos (Greek, 1915-1987), and “Portrait of a Lady,” by Hungarian-born artist Pal Fried (1893-1976). 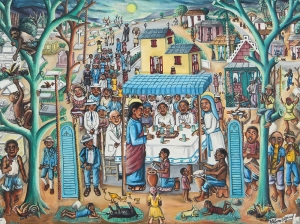 Additionally, the wealth of Haitian art in the sale makes it a category unto itself, led by a gorgeous “Marriage at Cana” by Wilson Bigaud (1931-2010). The oil-on-canvas painting dates to 1981, which was the same year that he painted murals of the same event–“The Marriage at Cana”–in the Saint Trinite Episcopal Cathedral in Port-au-Prince, widely regarded as his masterpiece. Pieces by Louisiane St. Fleurant, Seymour Etienne Bottex, Jerome Polycarpe, Abel Michel, Luckner Lazard, and many others contribute to the fifteen lots of 20th century Haitian painting. Other Haitian art at the auction includes thirteen lots of carved wood sculptures of various subjects and five lots of steel drum wall sculptures.

Contemporary ceramic art is led by three earthenware vessels by Bennett Bean (American, b. 1941). Bean’s signature style is at play in all three pieces; of his diverse influences, Native American pottery may prevail most in the abstract decoration and form. Ceramic artist Andrea Gill (American, b. 1948) also brings an earthenware vase to auction, an impressive piece at just under two feet tall. The glazed vessel sports a variety of floral, grass and leaf-like forms, with a face affixed almost like a mask to the front.

The auction features 10 lots of original fashion photographs by Paul Rowland, including original silver gelatin prints, unique polaroids, and contact sheets. Rowland founded Women Model Management and Supreme Management, and has been a driving force in the fashion and modeling industry since the 1980’s. 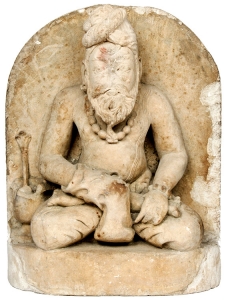 The variety in Asian art is almost boundless, with pieces in all categories of art, furnishing and decor from China, Japan, Tibet, Nepal, India, Thailand, Indonesia, Turkey and Afghanistan. Over 100 lots from the estate of Robert Swan Lindsley and Eric Hoage, Philadelphia, include Chinese and Japanese ceramics, porcelain and earthenware, carvings, and scroll paintings, prints and calligraphy. Of particular note are two lots of carved stone statues dating back to the 11th or 12th centuries: a sandstone carving of the deity Kubera from India, and a grouping of two carved stone heads, mounted on stands, one an Indian sandstone head of Vishnu, and the other a stone head of Buddha Shakyamuni, from Thailand.

Large statuary and garden adornments are also available in the sale. Once a fixture at Ravenhill Academy of Philadelphia, a massive statue of Saint Michael stands at over six feet high. The bronze statue bears the stamp of its studio, the Daprato Statuary Company of Chicago, well-known for its production of fine religious statuary and fixtures since the mid-19th century. A neo-classical urn of patinated bronze, created on the model of a classic antique garden urn, is highly decorated with garlands, cherubs, and the faces of lions. 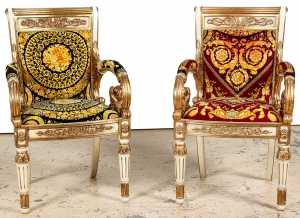 Furnishings traverse a range of styles, time periods and types, from a marble-topped Art Deco center table with wrought iron in the style of Edgar Brandt, to a Charles and Ray Eames chaise longue named ‘La Chaise,’ whose white abstract form was inspired in 1948 by the sculpture “Floating Figure,” by Gaston Lachaise. Other notable lots include a pair of opulent Versace Louis XVI-style bergeres, with affixed Gianni Versace nameplates, a Gaetano Pesce Feltri chair of royal purple and red, and two antique 19th century confectioner’s tables, with glass surfaces that were designed to stay cool for displaying chocolates. Many additional elements for interior design statements range from a vintage Williams Pin Bot pinball machine to a French grape harvest basket, tole-painted with the name of the Chateau Coufran Winery.

High-quality designer home goods and accessories also put in an impressive showing, led by a Louis Vuitton cabin trunk, dating to the late 19th or early 20th century, with an associated display stand. Other Louis Vuitton items at auction include a hard-sided valise suitcase, and a monogram hat box. Two Cartier timepieces are auctioned separately: an Art Deco style gilt brass and enameled desk clock from Cartier Paris, with its original box and fitted case, and a 1930s Cartier ladies watch, of solid 10 karat gold and diamonds.