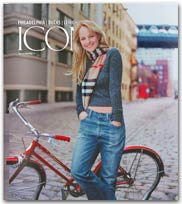 The article below is featured in the Philly arts magazine ICON this month (November). It was reprinted with permission from ICON Magazine. You can review the entire issue, and past issues, at iconmagazineonline.com

In 2009 a West African artist with one name made Barack Obama his lobbyist. Sheff painted portraits of Obama to advertise his sign-painting store in Accra, Ghana. Then he placed the pictures outside his ramshackle shop, hoping that customers would be more inclined to employ a sign painter endorsed by likenesses of America’s first African-American president. 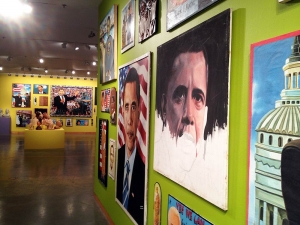 That July an American entrepreneur-ethnographer named George Jevremovic stopped by Sheff’s shop. He was hunting for Obama images for his collection of West African signs where caricatures of celebrities–Martin Luther King Jr., Michael Jackson– promote businesses–barber shops, cell-phone stores—they have no business promoting.

Jevremovic was seduced by Sheff’s unfinished picture of Obama. The collector thought the likeness seemed regal even without a mouth, a politician’s favorite asset. To him, the painting had the vitality and nobility of Gilbert Stuart’s famous unfinished portrait of George Washington, a model for the first president on the $1 bill.

Jevremovic ended up buying a bunch of West African Obamas: crude, polished, poignant, unintentionally funny, unfinished. He brought them back to Material Culture, his Philadelphia store/auction house/museum/bazaar of global goods and services for home and garden. In 2009 he exhibited these paintings, sculptures and accessories in the 60,000-square-foot former radio factory, which sells doors from British Colonial India, cabinets from Tibetan monasteries and enough Turkish rugs to carpet the Benjamin Franklin Parkway. He supplemented the show with a 39-month calendar showcasing Obama images, which he titled “Dreams of My Brother” after Obama’s memoir “Dreams from My Father.” 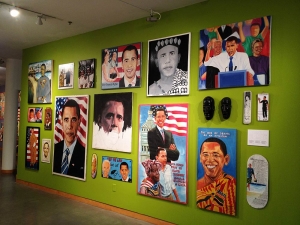 Dozens of Jevremovic’s Obamas are displayed through Dec. 9 in a Lehigh University show hitched to the bandwagon of Obama’s second presidential campaign. The 44th CEO of the United States appears as hero and king, dancer and “basket ball addict,” a pitchman-wingman with statesmen and entertainers. Part coronation and part carnival, “African Visions of Barack Obama” is all Obama-rama.

The exhibit was organized by two Lehigh teachers who are, like Jevremovic, bearded, burly, Falstaffian scholars. Over four decades Norman Girardot, a professor of religion studies, and Ricardo Viera, curator/director of galleries/museum operations, have made the Bethlehem school a hub of refreshingly raw works with many labels: self-taught, naïve, visionary, God’s junkyard. They’ve shepherded shows, installations and residencies by the likes of the late Mr. Imagination (aka Gregory Warmack), who made scepters and thrones with bottle caps, and the late Rev. Howard Finster, who made amazing mazes of space ships, herringboned angels and a baby prophet named Elvis Presley.

Girardot, Viera and Jevremovic all believe that art can be fine even when it’s not. This paradox isn’t a paradox for sign painters in Burkina Faso, Mali and other West African countries. They have no problem whatsoever advertising a tailor shop with a portrait of Prince Charles, or a video store with a caricature of Jesus Christ. For they are pure politicians and purer capitalists.

Jevremovic knew that Obama would join the hall of fame of West African sign painting long before he entered the Oval Office. West Africans, after all, had begun adopting Obama as a native brother and son during a 2006 speaking tour in Nairobi, when he was an Illinois senator. They were pleased to hear him praise his late father, Barack Sr., an economist in Kenya, and his step-grandmother, Sarah, who still lives in a Kenyan village. They were especially pleased by his promise to reduce disease and poverty in his ancestral homeland. Some considered him the second coming of civil-rights pioneer Martin Luther King Jr., who in 1957 came to Accra to celebrate the birth of Ghana. 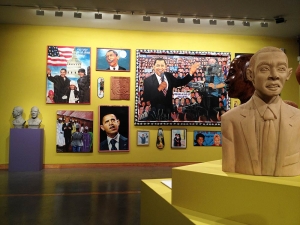 After Obama’s 2008 election, sign painters scrambled to make the new president a humane hero and superhero. Joakim Onyango Ndalo painted him with his grandmother over the red headline “MARTIN LUTHER K (JNR’S) DREAM COMES TRUE.” Ibrahim Iddrisu portrayed him as a smiling Superman. Laty, a chronically busy barber-shop artist, placed him in two very different pantheons. Obama shares one ad with Kofi Annan, former secretary-general of the United Nations, and Nelson Mandela, South Africa’s first black president. He shares another ad with rapper Tupac Shakur, whose murder made him a martyr.

Obama serves as mascot for works that could be mistaken for souvenirs for tourists or political conventioneers. His face animates sandals, hangers and the backs of flour bags, a common canvas for movie posters. “Where commerce ends and starts, and where art starts and ends,” says Jevremovic, “are very gray areas.”

Indeed, Jevremovic found a rather royal Obama by a roundabout. The traffic circle in Kumasi, Ghana, doubles as the outdoor store of Almighty God (born Kwame Akoto), a Pentecostal preacher who once painted taxis. Jevremovic was particularly intrigued by Almighty’s towering Obama in front of an American flag, wearing a tribal robe with a pulsing pattern, a time-traveling philosopher.

This fashionable message appeals to Baj Njie, an American-African barista at Re-Wired, my coffeeshop/social center in Bethlehem. Born in her mother’s native Manhattan, she lived from age 4 to 17 in Banjul, a city in her father’s native Gambia. There she learned about her father’s hero, Martin Luther King Jr. There she fell under the spell of tailor-shop signs with pictures of long, flowing dresses with rich designs. They intensified her love of clothes with elegance and mystery, style and substance. 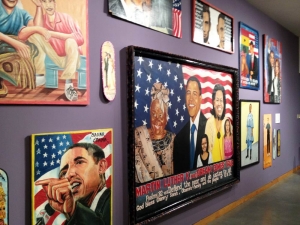 For Njie, the Obama sign paintings are more than advertisements for African businesses. They’re also advertisements for a healthier Africa. “They showcase what’s happening on the continent, how Africans view the world, that the whole rise of Obama has a deep meaning for them,” she says. “They can really identify with him, even though he’s never lived in Africa. A lot of them understand the historical significance of his journey. That’s why they think: ‘He’s one of us.’”

Not surprisingly, Njie rejoiced when Obama became America’s first African-American president. Asked to rate her excitement, she responds: “On a scale of one to 10, how’s 20?”

Not surprisingly, some of the fantasies of the Obama sign painters are, well, fantastic. One artist depicts Obama bicycling from Africa toward a glowing U.S. Capitol building, which is misidentified as the White House. Another artist portrays Obama dancing with an unusually stocky Ellen DeGeneres, who looks less like a talk-show host/comic than an off-duty roller-derby queen. She’s misidentified as Hillary Clinton, wife of America’s 42nd president, Obama’s former presidential rival and U.S. Secretary of State. The figure resembles Clinton as much as sex therapist Ruth Westheimer resembles sex-therapy candidate Arnold Schwarzenegger.

Michelle Obama fares even worse. In painting after painting the striking First Lady appears strikingly ugly. Imagine Jevremovic’s delight when he finally located a Michelle who looked like Michelle. Imagine his disappointment when artist D.A. Jasper said his model was actually an old girlfriend.

There was no disappointment in July 2009 when Jevremovic met one of his favorite Obamas. He was in Accra, attending Obama’s first speech in Sub-Sahara Africa. After the speech he and his son were robbed while they slept in a room over a disco. They reported the crime at a police station, relieved they lost a laptop rather than their lives. The station was across the street from Sheff Art Services, where Jevremovic was immediately mesmerized by Unfinished Obama. “I knew we got robbed,” he says, “for a reason.” 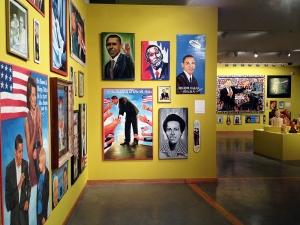 Jevremovic offered to buy Unfinished Obama. Sheff promised he would finish the painting in two days. Jevremovic asked the artist to leave it unfinished. He wanted to preserve the aura of Gilbert Stuart’s unfinished George Washington, the halo of presidential potential.

“I said: ‘Is it okay if I just take it like this? And Sheff just laughed and said, ‘No problem.’ Hey, the customer’s always right, right?”

Material Culture, 4700 Wissahickon Ave., Philadelphia, materialculture.com, 215-849-8030. A portion of proceeds from the sale of the Material Culture calendar “Dreams of My Brother” will be donated to fighting malaria fatalities, one of Obama’s favorite causes.

Geoff Gehman is a former arts writer for The Morning Call in Allentown. He is the author of “The Kingdom of the Kid,” a memoir of growing up in the middle-class, long-lost Hamptons (SUNY Press, 2013). He can be reached at geoffgehman-at-verizon.net.