Direct From the Eye:
The Jonathan Demme Collection of Self-Taught Art 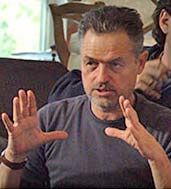 Day One Auction: Saturday, March 29, 2014, 11 AM
Browse the auction catalog on LiveAuctioneers.com

Material Culture will hold a weekend of auctions dedicated solely to the superb self-taught art collection of Oscar-winning director Jonathan Demme. In an exclusive arrangement with the auction house, Demme brings a multitude of sculpture and painting to the sales, totaling over 900 lots. “Direct from the Eye: The Jonathan Demme Collection of Self-Taught Art” is a compendium of Demme’s travels and tastes that transcends borders, encompassing Haitian and American self-taught artists from the 1940s to the present, contemporary intuitive painters from Jamaica, as well as art from Africa, South America and Europe. The auctions will be held on Saturday, March 29 and Sunday, March 30, commencing at 11 AM EST on both days.

Jonathan Demme’s impressive collection will also be on display in an exhibition running from March 22 to March 29, from 10 AM to 6 PM. A special pre-auction exhibition party will be held on Friday, March 28, from 7 PM to 11 PM, with refreshments and live music by Jamaican-born American Reggae recording artist and actress, Sister Carol East.

Demme, perhaps best known as the director of films such as The Silence of the Lambs (1991), Philadelphia (1993) and The Manchurian Candidate (2004), will be in attendance at the party with friends. Admission to the party and the weeklong exhibition are free and open to the public.

This comprehensive sale is an excellent look at Jonathan Demme as collector and curator, and the legacy he imparts for the enjoyment of self-taught art. An avid collector of diverse creative interests, Demme has developed a particular appreciation of Haitian art and culture. A Haitian painting he acquired at a New York gallery in the 1980s spurred him to visit the country, where he learned Creole and befriended local artists and musicians. Two documentaries, Haiti Dreams of Democracy (1988) and The Agronomist (2002), focusing on the life of prominent Haitian journalist and activist Jean Dominique, are the fruit of his time spent there. 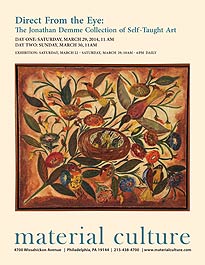 Jamaican intuitive painting also has a strong presence in Demme’s collection and in the sale. ‘Intuitive,’ as differentiated from ‘mainstream,’ is one of two movements that has dominated Jamaican art since the 1960s. Intuitive artists in Jamaica may draw upon African tradition, or they may simply create from their own imagination as self-taught artists do around the globe, heeding their own visions over that of an artistic establishment. The sale includes pieces by Jamaican artists Albert Artwell, Everald Brown, Jah Calo, Evandney Cruikshank, Ras Dizzy, Byron Johnson, Mallica “Kapo” Reynolds, Sylvester Woods, and Allan Zion.

A large number of significant American self-taught artists also make their way into the sale by means of Demme’s natural eye for the genre. Artists such as John Robert Ellis, Walter Ellison, Minnie Evans, Charlie Lucas, Justin McCarthy, J.B. Murray, Daniel Pressley, Roger Rice, O.L. Samuels, Jon Serl, Slingshot Ham, Edward Welch and Purvis Young are all shown to advantage in the auction, a testament to the diversity of the individual artistic vision.

Of particular note outside the realm of self-taught art is a painting by John Steuart Curry, one of the three great painters of American Regionalism in the first half of the 20th century. The auction also offers European self-taught art, African art, Brazilian Bahia paintings and pieces by anonymous artists. An enticing array of Americana and collectibles includes wood carvings, tramp art, weathervanes, trade signs, film posters, religious art and a collection of vintage glass etched soda bottles.

Demme himself has curated many exhibitions, guided by his love for the diversity of form and representation of self-taught art, and an esteem of the message and the excellence of the art over the fame of the artist. For example, in his 1997 exhibition, “Island on Fire,” which showcased over 100 Haitian paintings in Manhattan’s Equitable Life Building, Demme presented lesser-known Haitian artists alongside renowned masters. Demme’s other shows include “Haiti: Actualities and Beliefs” (1990) at Florida State University, “By Hand By Dan: The Art of Daniel Pressley” (1999) in New York City, “Allegories of Haitian Life from the Collection of Jonathan Demme (2006) at the Bass Museum in Miami Beach, Florida, “Jonathan Demme Collection: Inspiration of Haitian Art” (2009) at the fi:af Gallery in New York City, and “Candid Aspirations” (2010) at the Gladstone Hotel in Toronto, Canada. He has been part of the curatorial team for many shows at Ramapo College in New Jersey, such as “Haiti: Three Visions: Etienne Chavannes, Edger Jean Baptiste, and Ernst Prophète” (1994), “An Apparently Unimportant Event: Self-Taught from the Centre d’Art in the 1940s and 50s” (1997) “Odilon Pierre: Atis d’Ayiti” (2005), and “Still Lives to the Surreal: Selections in Haitian art from 1945 to 1995” (2012).

The exhibition in Material Culture’s gallery space will explore Demme’s collection in different ways. Haitian works will be grouped by region, with pieces from Haiti’s northern city of Cap-Haitien to the artistically vibrant port of Jacmel placed together. Alternatively, ‘mini-exhibits’ of Carribbean watercolors, ironwork and sequined Vodou Drapeaus will be paired with self-taught art from other countries. The show is curated by José Zelaya and Wael Qattan. Zelaya is an art dealer specializing in Caribbean and Latin American art, whose dealership, Arte del Pueblo, represents the most prominent collections of Haitian art in North America. His relationships with many of the early promoters of Haitian artwork in New York, such as Gloria Frank, Carol Rodman and Leon Sevilla, are two decades old. For the past ten years, he has worked with Demme, gaining from him an expertise in Haitian paintings of the 1940s and 50s. Wael Qattan is a writer, critic and performer whose academic focuses are Haiti and modernity, and Haitian visual representation and history in the US. A 200 page catalogue, with essays by Zelaya and Qattan, will accompany the exhibition.

If you are planning to attend the party on Friday, March 28, from 7-11 PM, please RSVP. It helps us plan!

Admission to the party and the weeklong exhibition are free and open to the public. Party details »

Planning to stay the night? View our hotel accommodations page