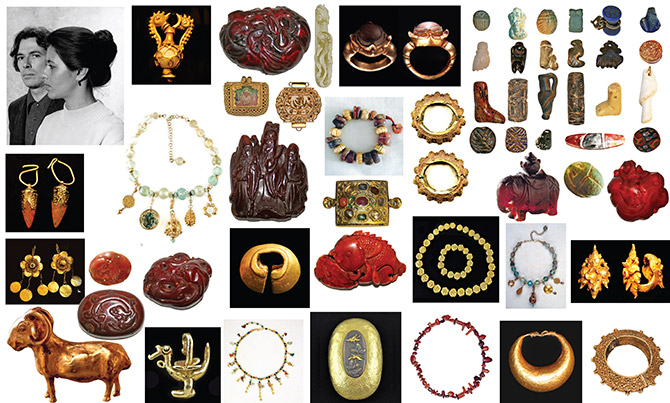 The full-day auction event commences at 10 AM EST on the Saturday of October 31, with real-time online bidding facilitated by Liveauctioneers, Bidsquare and Invaluable. The treasures in the sale will be on view to the public, free of admission, in Material Culture’s gallery space on the preceding days of October 29 and 30, from 11 AM to 5 PM.

Piero and Paola Ferro, of Milan, Italy, found their artistic calling as jewelry designers and craftspeople, drawing inspiration from antique, original pieces that they collected on their wide-ranging and frequent travels across Asia and the Middle East. Their brand, established in 1986, brings a strong multiethnic imprint to modern design, incorporating found pieces from these journeys in a synthesis of centuries and continents. A dedicated globetrotter, Piero Ferro began buying antiques abroad in 1978, and when he and Paola met in 1982, they began traveling together, seeking out treasures to resell to European dealers as a means of making their passion for travel into a business. Eventually, the precious stones, pearls, artifacts and jewelry fragments they found inspired their own designs, and they began traveling in part to source these incomparable materials. But on all of their trips, they would keep something truly exceptional or captivating for themselves—and this collection, the harvest of their extensive travels, is what Material Culture is proud to bring to market in this sale.

Nearly 300 pieces come to the sale from the Ferro collection, with origins in China, India, Pakistan, Afghanistan, Iran, Yemen, Japan, Thailand, Indonesia and the Philippines, and dating as far back as the second century BCE. One rare piece, preserved in its entirety, which might be said to lead the sale is an extraordinary Seljuq dynasty Iranian necklace made of carved amber amulets, dating to the 11th century. The amulets ringing the necklace bear different shapes—spearheads, lions, sphinx, and anthropomorphic figures—but all are carved in red amber, one of the most rare and valuable varieties. Another complete piece of sequence jewelry, remarkably maintained for its millennia of age, is a striking bracelet which alternates 22-karat gold beads with pieces of amber in different hues. The bracelet likely dates to the Parthian or Arsacid dynasty of the Persian Empire, as old as the 2nd century BCE.

The collection features a trove of ancient and antique gold jewelry from Afghanistan, Persia, India, Indonesia and the Philippines, including rings, bracelets, earrings, pendants, necklaces, and other artifacts. From the Majapahit period of what is now known as Indonesia, a pair of embossed and chiseled 22 karat gold bracelets, dating to the 15th century, are exceptionally fine. A 15th century gold ring evokes the splendor of this era, with a rose-like pattern encircling an apotropaic agate. A number of finely-detailed earrings and delicate ‘bird rings’ in the auction from this Javanese empire may date as far back as the 10th century. A highlight of later Indonesian gold is a stunning 18th century bracelet from Sulawesi, in finely-detailed 14 karat gold.

Some of the auction’s outstanding pieces in gold originate in India. One of the most remarkable is a 19th century pendant, with a painted surface that depicts Ganesha, flanked by Saraswati and Lakshmi. A brilliant, detailed frame of 22 karat gold, with layers of small golden orbs, encompasses the image. A complete necklace from the 19th century centers around another deity pendant, with eight ornaments of paper miniatures encased in glass on either side. Each piece of glass—square, round, and teardrop-shaped—are encased in 22 karat gold, with bell-like gold balls suspended from the bottom. Equally impressive, a string of 22 karat gold beads, with an intricate cut work and granulation construction, also dates to the 19th century.

Another highlight in gold, as old as the 10th century, is a 22 karat star pendant with seven points, from the Philippines. It is auctioned along with the modern 22 karat gold snake chain from which it hangs. From Japan, a brooch of hammered 18 karat gold provides a magnificent mount for a kashira, the ornamented end of a sword’s hilt; this repurposing is a 19th century creation. Another item mounted in gold is a Roman-era jasper seal, fitted into a 20th century ring of 22 karats.

Probably the oldest artifacts at auction from the Ferro collection are its pieces of Bactrian gold, dating to the 2nd century BCE. From what is present-day Afghanistan, a pair of gold and garnet dolphin earrings, and a pendant of two birds holding a pearl, both in 22 karat gold, are most evocative of the Grecian and animist components of this culture. Other pieces of gold originating in the Bactrian kingdom include a 22 karat gold bracelet, two gold and garnet rings, and several pairs of earrings, including an impressively delicate pair of flower earrings with pendant petal-like discs. The auction also includes several ancient Bactrian stone seals, which are likely centuries older.

A substantial and important part of the collection is the abundance of antique Chinese amber, all of which dates to either the Ming Dynasty (1368-1644) or the Qing Dynasty (1644-1912). Perhaps the most impressive piece is an elephant statue made of rare deep red Burmite amber, but each of the amber artifacts in the auction displays a gorgeous marriage of hue and artistry. A total of 37 amber amulets depict a diversity of forms—human, dragon, phoenix, qilin, carp, flower, leaf, waves, clouds—which would have been stitched into cloth caps, made into pins or belt buckles to carry on the person as a talisman. Amber from Burma and from the Roman era are also brought to auction.

No less remarkable is the Ferro collection of jade, from several different cultures. From Moghul India, four separate lots of white jade pendants are exquisitely inlaid with gems and gold in the Islamic motif of different flowers springing from a single root. The most ornate is dotted with emeralds and diamonds, and features an additional crescent moon and calligraphic figure; all date to the 19th century. Also from 19th century India, a spinach jade walking stick handle is capped with the finely carved head of a mouflon ram. Two pieces of excellent Chinese jade incorporate other precious materials: a Qing Dynasty jade pendant is looped by gold and pink sapphires, and a white jade swan of the 19th century has a chiselled wave-capped wreath of 18 karat gold in which to nest. The sale also includes jade from Burma and Japan.

Another thrilling addition to the auction are seven pieces designed and created by Paola Ferro, giving ancient elements a new birth with modern invention. Each possesses a unique spirit through the amalgamation of its pieces’ history—one gorgeous necklace marries Roman translucent glass beads, sourced from Syria for the rich iron in its sand, Bactrian gold amulets from centuries BCE, and two fifteenth-century Arab coins. Another necklaces reunites an assortment of lapis lazuli beads and amulets from the Afghanistan of the Middle Ages, neatly spaced with gold beads. Pendants of Roman glass shaped like birds take flight alongside gold butterflies around a chain of glass beads and gold.