Material Culture Auctions a Selection of Items from Tolstoy Descendant

“Countess Natasha Tolstoy was married to Count Sergei Tolstoy, great grandson of the famous author, at the Tolstoy Foundation in Nyack New York in its magnificent Russian Orthodox Church on November 22, 1970. She wore the exquisite taffeta wedding dress with hand stitched pearls for the elaborate marriage ceremony designed for her at the iconic Fifth Avenue, New York store, Henri Bendel, and a double strand of graduated cultured pearls adorned her neck. She and the Count enjoyed her stunning antique American Gorham Sterling silver tea and coffee service having Rococo style Repousse decoration depicting cherubs, florals, fruit and scrolls which she  brought to the marriage along with the intricate Repousse sterling silver dressing set and the Russian Icons designed  by the famous Russian artist, Henryk Winograd. Her sterling silver English carriage clock always sat on her desk in her study, and its chimed hours were reminiscent of Big Ben. She and her “Count” would sit on their porch using her lovely patio table and chairs, enjoying the sounds of nature and perhaps some fine champagne and caviar. Occasionally they would eat off the 19th century French Sevres porcelain portrait plates having the Louis Phillipe mark for 1844, made for Chateau des Tuileries.”

— by Valerie Ogden, author of Bluebeard, and sister of the Countess
Natasha Ogden Tolstoy

Charles Gillman Currier, cousin of the famous printmaker, Nathaniel Currier of Currier and Ives, lived a humble and Spartan life like his famous cousin in his early years. He was said to have carried his mattress on his back to Harvard University when he was accepted, where Oliver Holmes, later to be a Supreme Court Justice, was one of his close friends.

Currier, who became a physician, traveled to Europe to advise different cities about the quality of their water. Like his entrepreneurial cousin he was extremely successful in doing so. He also ran a clinic for indigents in Paris, mainly artists. If his patients did not have the wherewithal to pay him he asked what they might give him instead of money. Thus he amassed many exquisite paintings, including works by: Albert Charpin (French 1842-1924); Jean Ferdinand Chaigneau (French 1830-1906); Narcisse Diaz (French 1807-1876); Ary Scheffer (French/Dutch, 1795-1858); Paul Emile Leon Perboyre (French, 1851-1929). 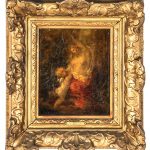 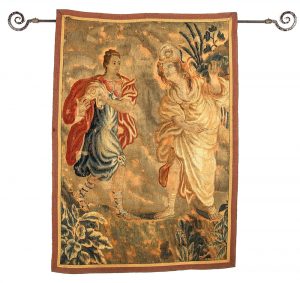 While Dr. Currier and his family lived in Paris, he purchased the exquisite 17th century Flemish tapestry fragment which hung in his living room.  His wife, Caroline Sterling, and his daughters wore different pearl necklaces, some cultured, some real, throughout the day depending on the activity they would participate in.

Jane Campbell married into the Sterling family in Jackson, Tennessee. Thus the long standing feuds in Scotland between the two clans were dissolved in the new world. All the Campbell/Sterling men on the Jackson, Tennessee plantations including Uncle Johnnie went to war against the Union in the Civil War and lost their lives. Uncle Johnnie, 16, was giving water to a Union soldier when a bullet from his own Southern side stuck and killed him. 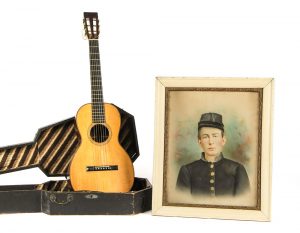 Some of the jewelry found in the guitar is now for sale including pearls, a turquoise ring and Egyptian pieces.