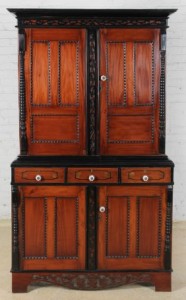 Material Culture’s September Estate Auction, sub-titled “Antiques, Collectibles, Fine and Decorative Arts,” heralds the fall with promise of more amazing deals and spectacular artifacts up for auction. The auction commences at 11 AM on Sunday, September 23. With items in all price ranges, both sale fanatics and those entirely new to auctions are invited to experience the thrill of bidding, and the joy of walking away with bargains. The auction catalogue is available at liveauctioneers.com, where anyone with access to the internet can bid on lots in real time.

A substantial portion of the auction comes from an estate collection of colonial furniture—largely British, Dutch and Portuguese—manufactured in India, Ceylon and Southeast Asia. Highlights include a Dutch colonial cabinet of fine satinwood and contrasting ebony, with decorative ceramic knobs, made in Sri Lanka circa 1800, and a 19th century British colonial starburst mahogany cabinet, with five drawers. Both cabinets are in excellent condition, and are valued at $1,500-$2,500, as part of a rich offering of twenty cabinets of similar significance. Other exemplary items of colonial furniture include a 19th century British Colonial rosewood chaise longue with curved ends and a woven caned seat, in excellent condition, expected to sell for $800-$1,200, and a 19th century British or Dutch colonial blanket chest, also in superb condition, worth $1,500-$2,500. This outstanding group of artifacts, the culmination of decades of collecting, also includes a fantastic selection of 16-19th century architectural pieces in stone and wood, such as a Mughal Empire (1526-1757) relief with deep, floriate carving, valued at $300-$600, and a Mughal carved stone capital from northern India, worth $200-$400, along with other carvings of related interest. 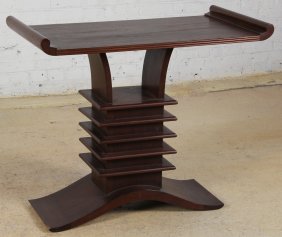 The auction also offers a wealth of fine Art Deco furniture from the early 20th century, with over fifty lots of carpets, tables, chairs, sofas, chests, and other assorted items. This category is led by a massive Art Deco mahogany boardroom table, measuring 241 inches long by 49 inches wide, valued at $10,000-$15,000 for its excellent condition, and an outstanding pair of Shanghai or Mumbai Art Deco doors of carved teak and iron, worth $1,000-$2,000. Other exemplary lots in this category include an Art Deco rosewood armchair with beige upholstery and engraved wood arms, valued at $600-$900, an Art Deco “Ashanti” table of rosewood, worth $800-$1,200, and a rare Shanghai Art Deco rosewood bed set with an artfully attached pair of side tables, worth $1,500-$2,500.

Fine art at this auction is led by a Frank Lynn Jenkins (1870 – 1927) bronze figurative nude archer statue entitled “The Huntress,” in excellent condition expected to fetch $2,000-$3,000; the auction includes several 20th century bronze statues. Other notable fine artworks include a late 19th century porcelain plaque made by the Königliche Porzellan-Manufaktur, the Royal Porcelain Manufacture of Germany, depicting, “The Penitent Magdalene” after Battini, in a giltwood frame, and valued at $2,000-$3,000. A work of oil on canvas characteristic of Philadelphian artist Andrew Turner (1944-2001) in its evocative depiction of jazz musicians, “The Jazz Players,” is expected to sell for $1,500-$2,000. In found art, several fascinating, sometimes dark, chair sculptures by an unidentified artist will be up for auction, valued at $200-$400 each.

The diverse offerings of the unique and the beautiful at this auction include items such as a 19th century Franco-Flemish tapestry in excellent condition, expected to sell for $800-$1,200, a large 19th century glass storage beaker from France worth $300-$500, an antique stone grinding wheel with a custom steel stand worth $600-$900, an antique Chinese low chair with a rattan seat valued at $200-$400, and a 19th century Mandalay lacquer and gilt Buddhist shrine from Burma of carved wood, valued at $400-$800.

Material Culture welcomes all interested collectors, buyers, and art enthusiasts to take advantage of the auction preview in its facilities in person. The September Estates auction preview will be open daily from Wednesday, September 19 to Saturday, September 22. Previews are open 7 days a week, 10am-6pm. Interested parties not able to visit the exhibition gallery in person can also find a full catalogue of this auction online at liveauctioneers.com.