Material Culture is proud of the successes of its October 14 sale, “The Spirits of My Reincarnation Brothers and Sisters: Art, Textiles, Antiquities, Carpets, Ethnographic Arts, Navajo Jewelry.” Art and artifacts of diverse origin, bound together by quality and rarity, provided unique opportunities for collectors of all levels. An impressive percentage of the lots were sold, at 0ver 90%. International participation was high, with bidders from 32 different countries, an interest matched by local and domestic collectors bidding in person, online, and by telephone.

The auction’s top lot was a bold, masterfully-rendered early Thangka scroll painting, dating to 14th-16th century Tibet, which saw an extremely spirited bidding war and sold for $46,000—over ten times its estimated selling price of $3,000-$4,000. This Thangka, depicting the deific reincarnation known as Vajra Varahi in Sanskrit and Dorje Pakmo in Tibetan, came to the auction from the Bill Liske Collection of Tibetan and Chinese Textiles and Artifacts. Other textiles that exceeded their estimates from Liske’s collection include a rare Tibetan High Lama Temple throne canopy of pieced silk brocade with dragons, from the late Ming period (1368-1644), which sold for $2,000 (est. $500-$700), and a large Chinese gold field dragon panel from the late Ming or Kangxi era (1661-1722), which was estimated to sell for $400-$600, but achieved $1,800. Also from Liske’s collection, a Buddhist Dharmapala Dance Mask, with a vibrant red pigment on mulberry or laurel paper mache, sold for more than expected at $3,500.

The title of the auction, “The Spirits of My Reincarnation Brothers and Sisters,” was borrowed from a painting by Nigerian artist Prince Twins Seven-Seven (1944-2011), which was the top seller in the rich field of self-taught art up for sale. A reworking of an earlier piece of the same title that was created in 1968-1969 (in the collection of The Philadelphia Museum of Art), the piece dates to 2006-2007. This painting of ink, batik dye, watercolor, acrylic and oil on cloth, featured in Henry Glassie’s book “Prince Twins Seven-Seven: His Art, His Life in Nigeria, His Exile in America,” easily exceeded its low estimate of $5,000, selling for a total of $6,700. Prince’s painting “…Beast” (dated 1991) ended up fetching $5,400, more than its estimated $3,000-$4,000 selling price. Other pieces by Prince, along with Cuban-American artist Felipe Jesus Consalvos, and Ghanian artist Kwame Akoto (“Almighty God”) also achieved prices well above their low estimates. 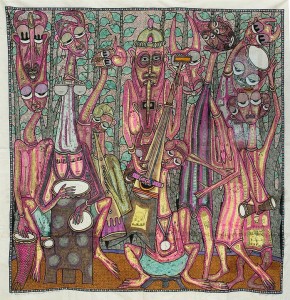 “The Spirits of my Reincarnation Brothers and Sisters,” by Prince Twins Seven-Seven

A strong offering of carpets also drew many interested and educated bidders. One early west Persian Kurd rug dating to circa 1800 but still in original estate condition, its deep indigo field exemplary of its well-preserved, vivid color, sold for $4,700. A Serapi carpet from 19th century Persia, also in original estate condition, was expected to fetch at least $4,000, and achieved $5,200. Among the many fine textiles that saw competitive bidding and sold for more than their low estimate, an exceptional Syrian judge’s robe stood out. The robe, of embroidered gold on silk tapestry, from 19th century Aleppo, won First Prize for International Dress Costume at the Eighth International Conference on Oriental Carpets (ICOC) in Philadelphia in 1996, and sold at auction for $3,000.

Other notable lots include a 19th century Burmese Elephant Bed in excellent condition, which was estimated to sell for $1,000-$2,000, but ultimately went for over five times the low estimate at $5,100. The auction concluded with over 100 lots of vintage Navajo jewelry, assembled by a local Pennsylvanian connoisseur in the 1970s. A majority of the hand-crafted rings, bracelets, pendants, necklaces, bolo ties, pins and earrings in the collection exceeded their estimated selling prices, including a Tom Jim sterling silver bracelet that went for $790 (est. $250-$300), and a Navajo silver coin necklace with Morgan dollars from the 1960s, expected to sell for $300-$500, which achieved $670.