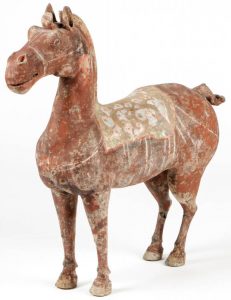 Material Culture’s Summer Estates Sale enters the auction season with 638 lots that express the company’s view of the art world as borderless. Fine art encompasses painting, sculpture, prints and mixed media, along with an excellent selection of self-taught art. Chinese art is led by millenia-old Han Dynasty ceramic horse figures, and includes ceramics from across the centuries, paintings, antique furniture, and textiles. Other textiles come to the sale from around the world, from pre-Columbian textiles, to antique Central Asian pieces, to vintage West African cloths, to American quilts, and the sale offers a similarly international showing of folk and decorative art. The auction concludes with over 80 lots of antique and vintage rugs from North Africa, Asia, and the Middle East. 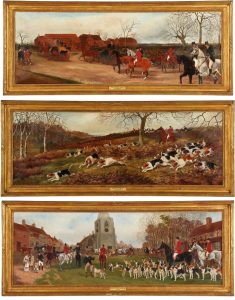 Leading lots in fine art painting include several 19th century British paintings from the estate of Charlene and George Harris, whose collection contains several pieces with equestrian and hunting themes. Three oil paintings by Sylvester Martin (British, 1856-1906), entitled “Off to the Meet,” “Breaking Cover” and “The Meet at Beoley, Warwickshire,” show hounds, horses and their well-suited riders at different moments in the hunt and against varying backdrops; these paintings are referenced in the catalogue “Important Sporting Art,” published in 2000 by Sotheby’s, New York. On a similar theme, two paintings by Edward Benjamin Herberte (British, 1857-1893), “The Find,” and “Full Cry,” are both works of oil on canvas dated 1887, and were acquired from Hyde Park Antiques of New York. A bronze sculpture of a prancing horse, titled “Cheval Libre,” is signed by Pierre Jules Mene (French, 1810-1879), known as one of the innovators of animal sculpture in the 19th century, and was purchased from the Victor Frances Gallery of London. Also from the Harris collection is a large landscape painting by Chinese artist Zhao Wuchao (b. 1944), a nocturnal scene with craggy cliffs above a cluster of buildings and a waterfall, rendered in fine detail with ink on paper.

A significant early American portrait of Major Daniel Gano of Cincinnati comes to auction from an estate in Center City, Philadelphia. Gano, the grandson of Reverend John Gano who is fabled as having baptized George Washington, was an important civic leader and the Clerk of Courts in his native Cincinnati. The portrait is attributed to John C. Grimes (1804-1837) of Kentucky, who was known to be in Cincinnati at the time the painting was created, circa 1830-35, and whose portraiture bears similar features. Also from an estate near Philadelphia, two oil paintings by Pennsylvania impressionist Walter Emerson Baum (1884-1956) depict homes in the Bucks and Lehigh Country areas, gathered within the frame around dirt roads and beneath washed skies. 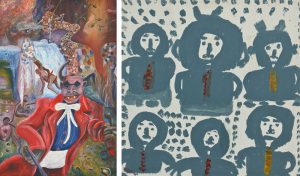 Many of the sale’s highlights in self-taught art come from the collection of Robert Cargo of Alabama, a well-known art dealer and pioneering supporter of self-taught artists. Six oil paintings and three grouped lots of works on paper represent a significant percentage of the works still available by Roger Rice (b. 1958), an ordained fundamentalist minister whose wild devils and surrealistic landscapes are more visionary than Biblical. Mary Tillman Smith (1904-1955) is shown in a series of her bright portraiture groupings, four painted on wood and a fifth on paper. Chuckie Williams (1957-2000) participates in four of his entertaining pop culture portraits, half expressionistic and half caricatural, subjects including Suzanne Somers, Michael Jackson, Tracie Spencer, and the music group Bel Biv Devoe. Other notable artists brought to the sale in Cargo’s collection include Mose Tolliver (1925-2006), with five group lots of paintings, Joseph Hardin (1921-1989), with four paintings, and Jim Bloom (b. 1968), with seven mixed-media paintings.

The diverse collection of Bob Brand and Liz Werthan, of Philadelphia, contributes prints and works on paper by many prominent artists of the 20th century. Roy Lichtenstein (American, 1923-1997) is seen in his 1983 color lithograph “Against Apartheid,” numbered 9/100, signed and dated in pencil. This print was created for the benefit of Artists of the World Against Apartheid, a project started by French artist Ernest Pignon-Ernest that intended to donate works by artists from around the world to the first democratic, non-racial government in South Africa. Also the fruit of this initiative is the piece “World Artists Against Apartheid,” by Robert Rauschenberg (American, 1925-2008), similarly numbered, dated and signed in pencil, in which Rauschenberg uses his proclivity for collage to comment on the subject. A late color lithograph by Jacob Lawrence (American, 1917-2000), dated 1991 and entitled “Builders Three,” renders one of his favorite themes in his bright, clear ‘dynamic cubism.’ Lawrence considered builders to be a positive symbol for collaboration, progress and hope, first casually appearing in his work in the 1940s, but becoming a dominant focus for the artist by the time this print was made. Romare Bearden (American, 1911-1988) appears at auction in his “Introduction for a Blues Queen (The Jazz Singer)” also a common subject for him at this point in his career. The 1979 color lithograph depicts the jazz club in splashy paint and is referenced in Gail Gelburd’s “The Painted Sounds of Romare Bearden,” published in 1994. The wealth of significant artists with prints in the auction also includes Alexander Calder (American, 1898-1976), Ben Shahn (1898-1969), Wharton H. Esherick (1887-1970), Sister Corita Kent (American, 1918-1986), Louise Nevelson (1899-1988), Leonard Baskin (American, 1922-2000), Kathe Kollwitz (German, 1867-1945), and Rockwell Kent (American, 1882-1971). 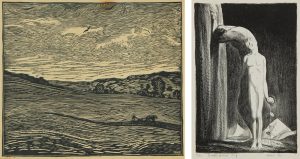 The Brand-Werthan collection also provides highlights in Mexican folk art, led by a male and female pair of nearly life-sized ‘calacas,’ or Day of the Dead skeleton figures, made by Pedro Linares (1906-1922), the legendary cartoneria sculptor. Linares’s legacy also makes a showing, with calacas by his son Felipe Linares (b. 1936) and by Antonio Joel Garcia (b. 1955), who began working in the elder Linares’s workshop at the age of 10. A comparably renowned master in his medium, Juan Horta Castillo (1940-2006) leads fourteen grouped lots of Mexican festival and dance masks.

Additionally noteworthy in sculpture is a selection from Steve Tobin’s (American, b. 1957) Toy Bronze Series, one-of-a-kind sculptures that Tobin creates by casting a combination of artifacts in bronze. Tobin is perhaps best known for his bronze sculptures of objects from nature, but just as his cast-bronze root sculptures are an evocation of the power and depth of something unseen, these sculptures are a commentary on the resonance of their original components—sometimes merely whimsical, other times clearly political.