Jim was recently the subject of an essay titled “Stories of Wit and Irony” by Ron Schira in Raw Vision Magazine (Spring/Summer 2012 RV 75, p. 44-47). Jim was born in Allentown but has spent most of his adult life in Philadelphia. From childhood on, Bloom has been making visual art that is directly related to his own experiences, as well as his interests in film, story-telling, and the visual languages of his culture. Using collage drawing and painting, Bloom conjures an immediacy of action, story and relationship. We are excited to have recently acquired over one-thousand works by Jim Bloom. Strangers are Strange, an exhibition of works by Jim Bloom will run September 21- October 27, 2013. An exhibition catalogue will be available for sale. 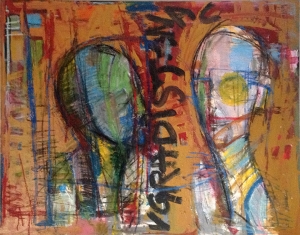 Vladan holds a BFA from the University of Fine Arts in Belgrade, Serbia where he taught art history and painting.

A painter and photographer, his work has been exhibited in both the United States and Europe. While living recently in Philadelphia, Vladan was a part of the Continuing Education Faculty of Moore College of Art & Design and worked at Material Culture as a Merchandising and Display Assistant.

He is currently living in Vienna.

Self-taught artist Mr. Imagination (aka Gregory Warmack) worked with everyday objects, repurposing “trash” materials–like bottlecaps–into art. His near-death experience in 1978 took him to a world of ancient civilizations. When he revived, the visions inspired him to dedicate his life towards the creation of art with spiritual power and and a positive restorative force that could make people happy.

His works continue to be held in the permanent collections of The Smithsonian American Art Museum, Washington, DC, The American Visionary Museum in Baltimore, MD, the Museum of American Folk Art, New York, NY, the High Museum of Art in Atlanta, GA, and other institutions.

In 2002, Mr. Imagination became more well-known in the local arts community of Philadelphia, and Material Culture was privileged to carry his work. In 2005, Material Culture commissioned Mr. Imagination to create one of his famous thrones from one of our West African Asoso chairs. The artist spent a week creating the piece in the store, working from morning until night as visitors came by to watch the work in progress.

Maryann received her M.F.A. from the University of Pennsylvania and her M.A. Ed from Michigan State University. She was heavily influenced by the Abstract Impressionists, and in later works her philosophy reflected her travels to India and Tibet and studies of Buddhism. She was enlivened by these journeys which allowed for a new freedom of color and concepts as seen in her brushstrokes and bold colors. She was a teacher and beloved volunteer at both the Wayne Art Center and the Academy of Fine Arts, Philadelphia.

Despite his recent passing, Prince is one of Africa’s most famous contemporary artists, and was an original member of the acclaimed Osogbo School, named for the Yoruba town Osogbo, in southwestern Nigeria. Prince’s international fame garnered him exhibitions on every continent, and his work is in major museums around the world, including the Smithsonian Institution and the Philadelphia Museum of Art. In 2005, he was designated UNESCO Artist for Peace.

Prince’s additional identity as a musician also put him forward as a spokesman for Yoruba culture. Prince’s highly individual methods draw their imaginative power from traditional Yoruba mythology, and the animals, plants, humans, spirits and gods that figure in his work represent complex forces in his own personal cosmology.

Material Culture hosted the exhibition, “The Spirits of my Reincarnation Brothers and Sisters: The Art of Prince Twins Seven-Seven” after Prince had completed an artist-in-residency, creating several significant works. Noted scholar Henry Glassie’s book, Prince Twins Seven-Seven: His Art, His Life in Nigeria, His Exile in America detailed the time he spent creating these works at Material Culture.