Works by Felipe Jesus Consalvos at May 5, 2012 Auction

Works by Felipe Jesus Consalvos at May 5, 2012 Auction 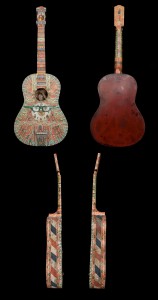 Among our May 5th auction’s many offerings, we seek to showcase the works of talented artists whose work travels beyond the traditional borders of fine art. Self-taught artist Felipe Jesus Consalvos (1891-c.1960) will be represented at auction by three of his striking mixed media pieces, created in the vernacular tradition of cigar band collage. Working as a cigar roller for much of his life, Consalvos transformed the tradition that surrounded him into a complex, sophisticated blend of political satire and Dadaist absurdism. From his birth outside of Havana, Cuba, to his emigration to Miami in 1920, and later, to Brooklyn and then Philadelphia, he became highly skilled in the creation of playful collages on paper, found photographs, furniture, and musical instruments—such as the spectacular piece “Guitar,” featured in our May 5 auction, in which a real guitar is almost entirely covered by cigar bands. Fanned, feathered and striped, the cigar bands set a rhythmic stage for a clock face at the guitar’s center, the ‘face’ of the clock enhanced by eyes and even a physical pair of plastic glasses. A photograph of a woman looks expressively out of the sound hole. This mixed media masterwork is expected to sell for $4,000-$6,000. 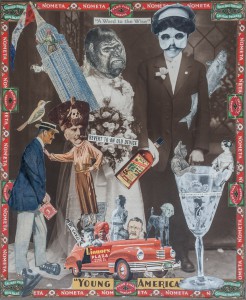 The other two Consalvos pieces are a framed collage entitled “Young America,” and a mixed media collage on an octagonal game board, named “Do Not Storm the System,” valued at $2,000-$3,000 and $3,000-$4,000, respectively. Both derive their titles from clippings of those phrases incorporated into the work. The yellow lettering of “Young America” runs along the bottom of a picture of a bride and groom, who have been given new collaged heads of a gorilla and a grinning masked face. As he does in so many of his works, here Consalvos jests with
social issues (a cup bearing the clipping “The Husband-Wife Relationship” holds what appears to be a fine nineteenth-century lady and her African-American servant) and political ones (for example, George Washington’s head appears on the body of a terrier). One wonders if the jester at the center of his piece “Do Not Storm the System,” balancing that phrase on his jester’s bauble, surrounded by historical figures in drag, was some representation of the artist’s self.

Consalvos was not known as an artist during his lifetime, but appreciation of his works has only continued to increase since his entire oeuvre, numbering 825 collaged artworks, were discovered in a Philadelphia garage in 1983. His first solo exhibition was with the Fleisher/Ollman Gallery of Philadelphia in 2004, and his most recent solo show was at the Andrew Edlin Gallery in New York in 2011. Consalvos’ pieces have been shown in larger exhibitions across the country, in Italy, and in Switzerland, and are in the permanent collections of museums such as the  Philadelphia Museum of Art, the High Museum of Art and the American Folk Art Museum. Roberta Smith, an art critic who discusses the guitar featured in our auction in her article “Red, White and Blue Americana Atop a Cultural Rainbow,” (New York Times, January 20th, 2006), describes Consalvos as a “self-starting modernist” who is “on a par with folk-art greats like Henry Darger, Martin Ramirez and James Castle.”