DOWNLOAD THE CATALOG (PDF)  |   BROWSE THE SALE ON LIVEAUCTIONEERS.COM

With spring comes Material Culture’s exciting Spring Estate Auction, sub-titled “Art, Antiques, Oriental Carpets, Decorative and Ethnographic Arts.” The sale commences at 11 AM on Saturday, March 30, offering more astonishing deals and spectacular artifacts, including art from the collection of global healthcare company GlaxoSmithKline, selections from Max Garb’s collection of African and Ethnographic Arts, items from fine carpet and furniture importer Michaelian & Kohlberg, and from private estates around the country. With nearly 400 lots in all price ranges, both sale fanatics and those entirely new to auctions are invited to experience the thrill of bidding, and the joy of walking away with bargains. The auction catalogue is available on liveauctioneers.com, where anyone with access to the internet can bid on lots in real time.

The auction opens with 26 lots of oil painting, watercolors, illustration art, mixed media collage, and engraving. Leading this category of fine art is a painting by Philadelphian artist Wlater Stuempfig (1914-1970), entitled “Cape May Point,” from a private local collection. Stuempfig was born in Germantown, Pennsylvania, and studied at the University of Pennsylvania and the Pennsylvania Academy of Fine Arts. Considered by many to be one of the finest American realist painters of his time, Stuempfig sold paintings to the Whitney Museum and the Museum of Modern Art in his first solo show in New York, and his pieces continued to sell steadily throughout his career. Stuempfig’s romantic realism, exploring the solitary atmosphere in the Pennsylvania countryside, seashore, and urban environments, along with the figures that inhabit them, ran contrary the Abstract Expressionism movement of his contemporaries. In the painting up for sale, “Cape May Point,” the seashore and an assemblage of beach-goers are pervaded by Steumpfig’s classic ambience. Many of the figures’ faces are turned or indistinct, including that of the painting’s most prominent inhabitant, on the left, whose back is turned to the viewer, leading the eye to the Victorian buildings at the sea’s edge and the sweep of the ocean’s horizon line at right. The two figures in the foreground with faces turned into the frame appear to be looking at an approaching friend, who is only visible as a waving hand at the extreme right. This signed work of oil on canvas, measuring 42 inches by 52.5 inches with its frame, bears a pre-sale estimate of $5,000-7,000. 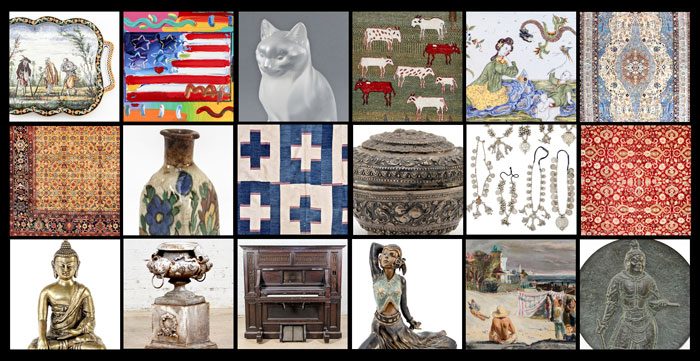 Also notable in fine art is a mixed media piece by American artist Peter Max. A pop art print of an American flag, painted in bright, expressive strokes, bears additional embellishment by the artist in acrylic paint. Peter Max’s distinctive style was so influential in counter-cultural graphic design in the 1960s and 70s that he has genuinely become a pop culture icon. Born in Germany in 1937, Max lived in Shanghai, Israel and Paris as a child before his family settled in Brooklyn in 1953. In 1962, he started a small arts studio, and his intense color palette, often employing most of the visible spectrum, placed his studio’s posters at the forefront of the psychedelic movement. His work became pervasive through appearing in advertisements, television, and household objects like art clocks and postage stamps, and Max continues to work as the official artist for major events, such as the Grammys or the World Cup, and provide adornment for public objects like airplanes and cruise ships. Throughout the decades, Max has frequently worked with patriotic American imagery, including paintings of many presidents, a Statue of Liberty series, and, most recently, his pop art American flags. The flag mixed media piece at auction measures 25 inches by 29 inches including the frame. The back of the frame is signed with a dedication, valuing the piece at $1,000-2,000.

The auction also features approximately 85 lots of fine rugs and carpets, led by a Lori Pambak Kazak Rug from circa 1900, valued at $5,000-7,000. Lori Pambak is a mountainous region of Armenia that borders Georgia, and the rugs are thought to originate with members of the Lori tribes of Iran. This 6 foot 8 inch by 9 foot 8 inch rug bears the tulip shaped medallion at center that distinguishes a Lori Pambak carpet. In very good overall condition with a recent cleaning, the many shades of blue, cream and russet come forward in the carpet’s geometrical play. Other highlights include an outstanding classical Agra carpet valued at $4,000-6,000 and a fine Persian style carpet worth $3,000-5,000, both from Michaelian and Kohlberg. In addition to a wide variety of carpet styles, including Tebriz, Sultanabad, Khotan, Ferahan, Mohtashem, Bidjar, Sarouk, Heriz, Kazak, Chinese, Tibetan, and Modernist, the auction contains a fine offering of vintage African, Indian, Indonesian and Native American textiles.

GlaxoSmithKline brings a number of items from its art collection to this auction, in advance of the dedicated auction of other fine and decorative arts from the healthcare company on April 14. One featured artifact is a Navajo Germantown blanket from circa 1880. “Germantown” blankets get their name from the area near Philadelphia where the wool was thought to originate. In 1868, the U.S. Government began to supply the Navajo with factory-made yarn, as part of an ‘annuity’ arrangement meant to compensate for the loss of the sheep from which the weavers originally sourced wool. By the 1870s, licensed traders were providing these commercial yarns, and Navajo blankets made of these brightly-colored yarns are generally referred to as Germantown weavings. These yarns cease appearing in Navajo textiles after 1900. Measuring 4 feet 2 inches by 6 feet 1 inch, the blanket at auction features a bold red field, dotted with crosses in varying shades of blue and medallions of maroon, white, and black. The excellent condition of the textile values it at $4,000-8,000. Also from GlaxoSmithKline’s collection is an Amish quilt from Lancaster County, dating to circa 1900. This lovely quilt of lavender, plum, and pale blue with intricate quilting measures 79 inches by 79 inches. Featuring one of the oldest Amish quilt designs, this center diamond quilt is expected to sell for $300-600. 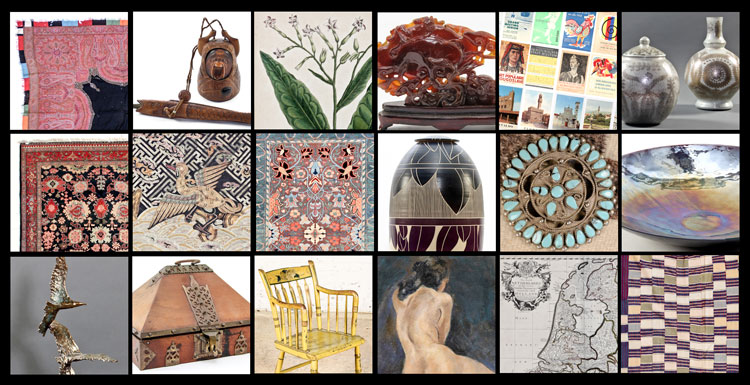 Approximately 50 lots in the auction come from Max Garb’s collection of ethnographic arts, which will be the subject of its own specialty auction on April 28. A total of thirty-six masks from Africa and North America are led by two antique painted Kwakiutl masks. A group of Native American tribes from the Pacific Northwest, the Kwakiutl place great value on masks in their culture. Through ceremonies or dance, masks can become manifestations of supernatural beings or ancestral spirits, and give the spirit who temporarily inhabits the mask the ability to communicate. Both of the carved wood masks at auction have pre-sale estimates of $400-600. The sale also includes a large number of Mexican dance masks, and masks from a variety of African tribes and ethnic peoples, including Dogon, Kuba, Salampasu, Baule, Ogoni, Yaure, Tabwa, Chokwe, and others. Garb, who lived in Chicago, Illinois, spent nearly four decades amassing a collection of items from all around the world; this auction bears additional items of decorative art from China, Japan, and Russia.

The auction also showcases a number of truly ancient artifacts. One is a“false-head” mummy bundle from Chancay, in the Lima region of Peru, which may date anywhere from 1000-1470. In Incan culture, the mummified remains and other belongings of the deceased would be wrapped in cloth before burial. False-head funerary bundles, or cabezas falsas, are a feature of high-ranking burials in which a protuberance on top of the wrapping is stuffed with cotton to represent a human head. A rare item, this mummy bundle measuring 19 by 16 by 5 inches is valued at $1,500-2,000. Another ancient artifact at auction is a bronze tripod cauldron dating to the Seljuk era, circa 1016-1153; at its height, the Seljuk empire stretched from Anatolia through Persia. This 7 by 17 by 17 inch vessel is expected to sell for $800-1,200. A glazed ceramic bowl from Nishapur, in eastern Iran, dates even earlier, to the 10th century. The Kufic script that adorns the cream interior of the bowl was in use in the region from the 7th to 10th centuries. Measuring 3.5 by 9.5 by 9.5 inches, this bowl bears a pre-sale estimate of $800-1,200.

Art and decorative art made of glass comprise approximately 25 of the auction’s lots, led by a “Blue Seaform Vase” by American glass sculptor Dale Chihuly. Born in 1941, Chihuly studied at the first glass program in the country, at the University of Wisconsin, and then the Rhode Island School of Design, where he later taught and established the school’s glass program. His Pilchuk Glass School in Washington State has been integral to the development of glass as an avant-garde fine art. His works appear in over 200 museums worldwide. The ‘seaform’ is a classic type of Chihuly creation that he started sculpting in the 1980s; the gorgeous rippling blue vase at auction dates to 1997, and is signed and engraved “PP’97” by the artist. It measures 8.5 by 9 by 9 inches, comes with a plexibox for display, and is valued at $1,500-2,500. Other glass pieces at the sale include six Lalique decorative items, amongst which are an “Ondines” vase worth $800-1,000 and a “Chat Assis” cat figure valued at $500-700.

Material Culture encourages all interested collectors, buyers, and art enthusiasts to take advantage of the auction preview in its facilities in person. The Spring Estates Auction preview will be open daily from Wednesday 3/27/13 to Friday 3/29/13. Exhibitions are open from 10am-6pm. Interested parties not able to visit the exhibition gallery in person can also find a full catalogue of this auction online at liveauctioneers.com.

Those drawn to the art and artifacts in this auction should also keep in mind Material Culture’s busy spring season, with an auction focusing on the GlaxoSmithKline Fine Art Collection scheduled for Sunday, April 14, at 11 AM, and a sale dedicated to the Max Garb Collection of African and Ethnographic Arts, commencing at 11 AM on Sunday, April 28. Please visit our upcoming auction schedule for a full list of sale dates.